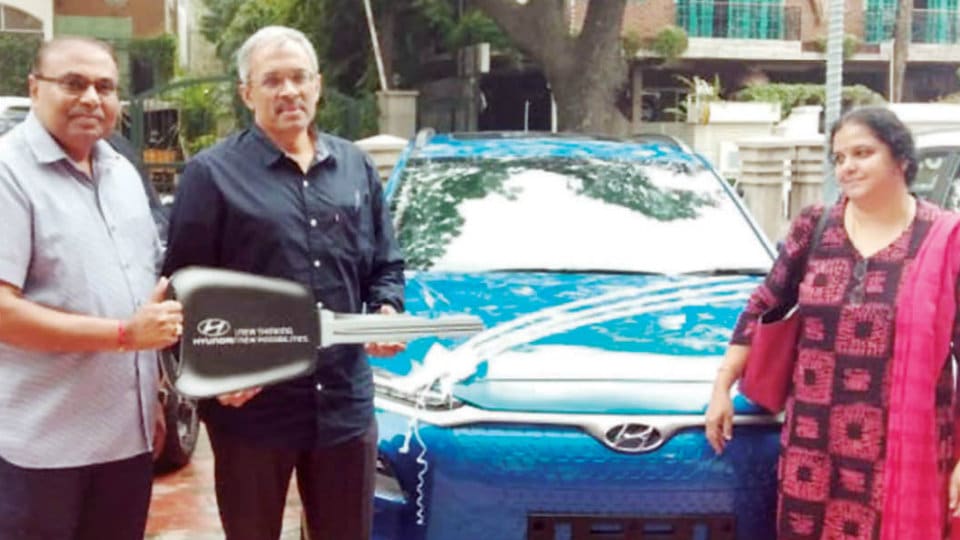 Mysuru:  Environmentalist and city’s Raghulal and Co. owner Raghavan became the proud owner of the first Hyundai Kona Electric car in the State. The key of the car was handed over to Raghulal by S.V.S.S. Gupta, owner of Advaith Hyundai in Bengaluru, yesterday. Raghulal’s wife Radhika Raghulal was also present.

Hyundai Kona has no Road Tax and recently the Central Government also announced the reduction of GST on electric vehicles during the Budget.

Kona Electric is India’s first long-range Electric Vehicle (EV) which has an ARAI-claimed efficiency of 452km.The Kona EV’s electric motor churns out 136PS and 395Nm. It is capable of doing 0-100kmph in 9.7 seconds and maxes out at 154kmph. The electric motor draws power from a 39.2kWh battery pack and support fast charging which juices up the battery from 0-80 per cent in 57 minutes. The company has provided a guarantee of 1.60 lakh kms or 8 years for the battery.