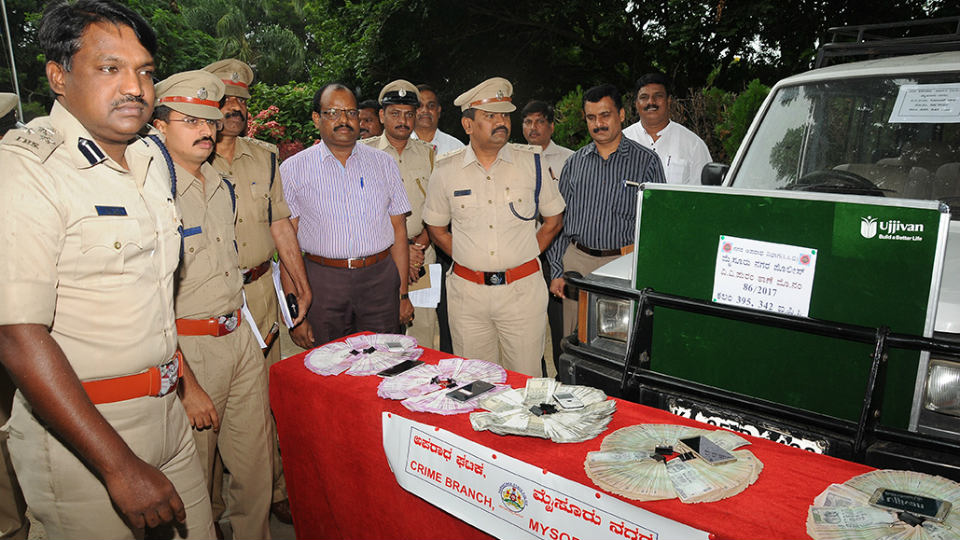 Mysuru: The Mysuru City Police, who conducted special drives during this month, have arrested five mobile phone snatchers and two persons for changing IMEI  numbers of mobile phones and selling them apart from nabbing eight dacoits.

The Police have recovered Rs. 8,69,900 cash, 32 mobile phones of various companies worth about Rs. 3.92 lakh, Tata Sumo and a TVS Apache bike from the arrested.

The seized properties were displayed at the City Police Commissioner’s office in Nazarbad here this morning.

Lakshmipuram Police have arrested a person on charges of stealing a mobile phone and have recovered the mobile phone worth about Rs. 30,000 from him.

The arrested person has been identified as Hemanth, a resident of Dattagalli ‘H’ Block, Ramakrishnanagar in city.

The accused, on June 7, has stolen an iPhone which was kept for display in Big Bazar here and a complaint was lodged at Lakshmipuram Police Station in this regard.

Based on the CCTV footages and through the IMEI number of the cell phone, the Police on July 17, arrested the accused and recovered the phone from him.