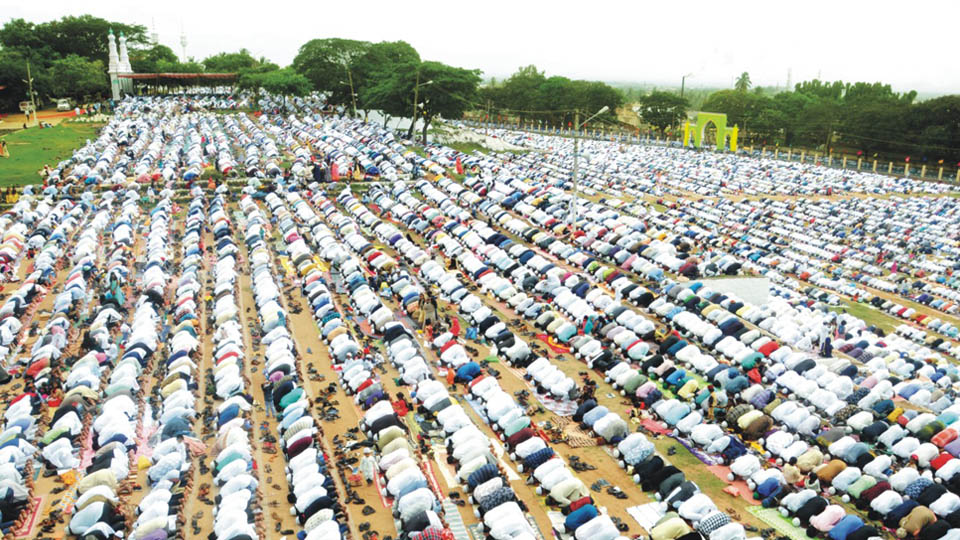 Mysuru:  The sprawling Eidgah Maidan at Tilaknagar, which was completely spruced up, was teeming with people as nearly 60,000 Muslim brethren gathered to offer Ramzan prayers this morning.

Leading the prayers, Sir Khazi of Mysuru Hazrath Moulana Mohammed Usman Shariff, called upon the people to give 2.5 per cent of savings as ‘Zakat’ to the poor and needy as alms.

“God wanted everyone to understand what hunger is and hence the fasting during the holy month of Ramzan was introduced. It is a month-long training to understand how the poor and the needy feel when they go without food for days. Hence, charity is a very important part in one’s life that everyone should follow,” he said.

Mohammad Paigambar, the Prophet, always said that all are equal in the eyes of God and spoke about the mutual understanding between Muslims and non-Muslims, he said.

“There should be communal harmony, peace, unity, security and prosperity in the country and only then can a nation prosper. One should not discriminate between castes and religion and all must be treated as equal,” stressed Sir Khazi and added, “The country is facing problems and it is very important to save humanity, which should be the main goal of every Indian.” Tourism and Sericulture Minister S.R. Mahesh assured the gathering that all the schemes meant for the poor and needy will continue to be implemented and the government was with them all the time.

Ramzan prayers were also offered at the mosques in Tilaknagar, Rajivnagar 3rd Stage, Ghousianagar and a few other mosques in the city.

The Muslims wearing the traditional sherwani, pajamas and white skullcap were found greeting each other ‘Eid Mubarak.’ The boys in colourful dresses were also seen hugging one  another in the traditional way.