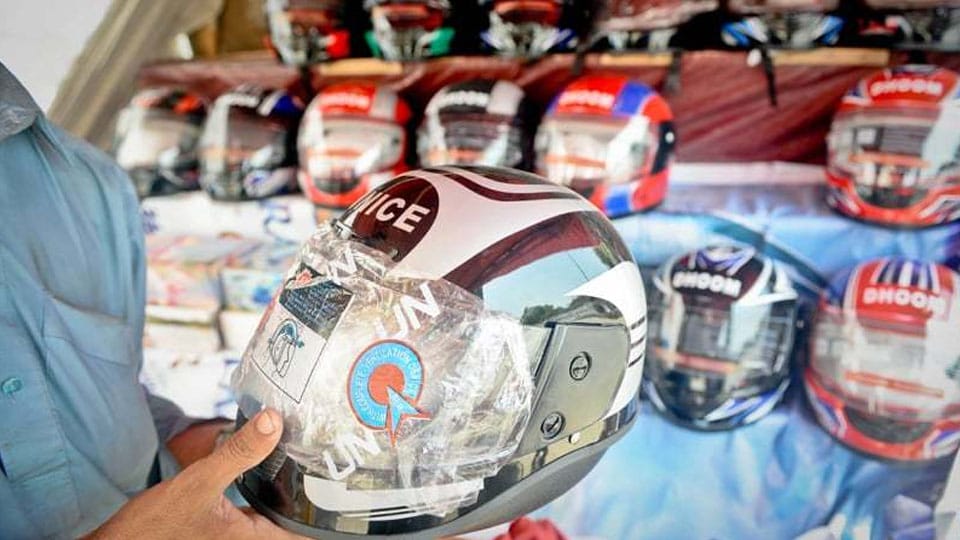 Drive against non-standard helmets in January

Mysuru: Even as the Union Ministry of Road Transport is planning to ban production and sale of non-ISI mark helmets as part of the government’s efforts to reduce road fatalities, the Mysuru City Traffic Police will soon launch a crackdown on the use of non-ISI certified helmets by motorists.

A special drive will be launched from January 1 and the helmet rule will be implemented 100 percent, both for the rider and the pillion. Though the Motor Vehicles Act mandates riders to wear only ISI-mark helmets, it is not being enforced and cheap and sub-standard helmet business is thriving in the city. Statistics say that two-wheelers account for the highest share in total road accidents.

Speaking to Star of Mysore this morning, DCP (Crime and Traffic) Dr. Vikram V. Amathe said the Police have noticed that helmets without the ISI mark were being sold at shops, the sale of which has been banned under Section 144 of the Code of Criminal Procedure, 1973.

“There was a proposal before us to ban the use of duplicate helmets as soon as the helmet rule for riders and pillion came into force. We are just implementing the rule now. While an ISI-marked helmet is available for Rs. 600 to Rs. 1,500, non-ISI marked helmets are available for just Rs. 100,” he said.

He said motorists wear non-standard helmets just to evade fines levied for not wearing a helmet. “People must understand that these helmets provide no protection in case of an accident. We had raided a couple of companies that manufacture such helmets and had destroyed their stocks. Still, the use of such helmets is widespread and this will be curbed,” the DCP added.

Non-standard helmets are sold at places including Chamaraja Double Road, Ashoka Road, Hunsur Road, near Akashavani Circle and other roadside make-shift stalls. “Both Civil and Traffic Police will raid such shops and seize the helmets and ensure that there is 100 percent implementation. From January, we will launch the helmet drive where we will stop and levy fine. We will force them to buy good quality helmets and only then vehicles will be released,” Dr.  Vikram Amathe said.