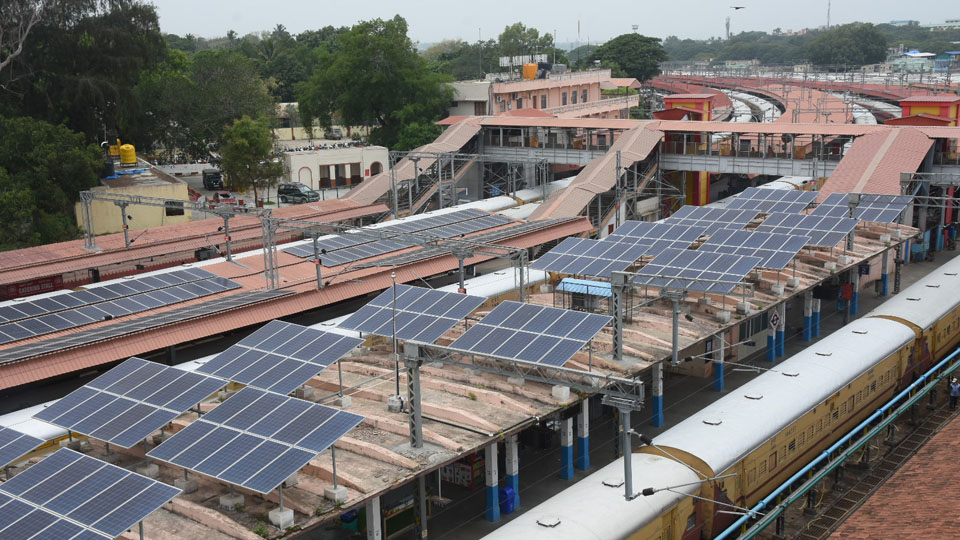 Mysore/Mysuru: The Mysuru City Railway Station has turned into a green energy zone by tapping solar energy. Solar panels have been installed at three places and the power generated there is not only helping the Station cut on electricity bills but also become eco-friendly.

The solar electricity generation during last financial year in SWR was 46.11 lakh units resulting in saving in electricity bills to the tune of Rs. 1.96 crore.

From the 100 KWp solar installation at Mysuru Divisional Railway Manager’s Office, 1.28 lakh units of energy have been generated during 2021-22 which has resulted in a savings of Rs. 5.11 lakh. From the 500 KWp solar panels at Mysore Central Workshop in Ashokapuram, 5.36 lakh units of solar energy was generated contributing Rs. 18.40 lakh as savings.

Apart from installation of solar panels at Stations and service buildings, even LC gates are operated using solar power across the zone.

SWR General Manager Sanjeev Kishore said that the Railway is tapping this clean energy and the same will accelerate the Railways’ mission of becoming a ‘Net Zero Carbon Emission Railway’ by 2030.

Mysuru Divisional Railway Manager (DRM) Rahul Agarwal told SOM this morning that the initiative of harnessing solar power was taken in the entire SWR and it has achieved significant savings. As per the plans of SWR, solar panels will be installed in 26 Stations across the SWR including Mysuru during the current financial year, he said.

“Installation of solar panels is a continuous process as the focus is on green energy. There are various factors that need to be analysed before installing them and the expansion will be done in phases,” the DRM added.