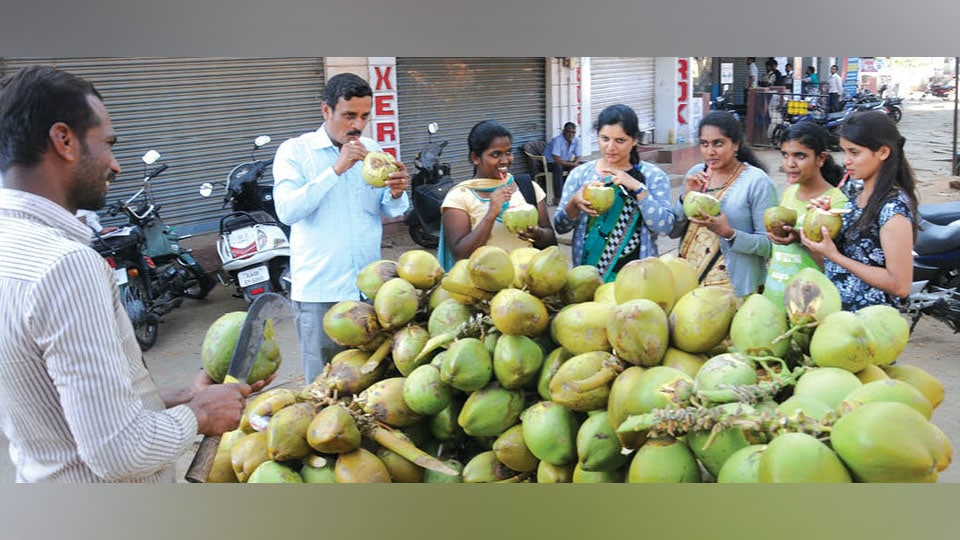 City reeling under heat as Mercury soars above 35°C

The city residents who are having a hard time in facing the worst drought in over four decades, are now reeling under the hot sun, with the mercury touching 35°C even before the summer has set in.

The rains, which are playing truant for the past 3 years, has already hit the residents badly with water levels at water bodies witnessing an alarming dip. The soaring heat ahead of the summer months, is clearly an indication that the coming months may be even hotter. The 35°C temperature recorded in the city this month is perhaps the highest in 10 years. The normal temperature in February was 31°C in previous years. However, the temperature this month which was 33°C in the beginning has now touched 35°C.

Last year saw one of the hottest days in recent times with the Mercury touching the 40°C mark. As people could not withstand the scorching sun, they chose to remain indoors.

At present the Mercury is hovering between 33°C and 35°C and there is no doubt that the coming months will be much hotter. The utter failure of monsoon and pre-monsoon rains last year, has only worsened the situation as people have to sweat it out under the scorching sun and also face drinking water problems.

In the wake of soaring mercury levels, the only hope for the citizens is good pre-monsoon rains. A good pre-monsoon rain in the summer months can not only bring down temperature but also mitigate the city’s drinking water woes. The winter season this year too was not that cold as compared to previous year, giving a hint that the summer months were going to be much hotter. No rains in March and April means that the summer will become unbearable as the Mercury is expected to touch 40°C in May and may remain so till the monsoon arrives in mid-June.

Even as the hot sun is taking its toll, aerated drinks, tender coconut, fruit drinks and such other drinks are in great demand in the city and elsewhere in the district.

The scorching heat has its bearing on the health of the people too, with a significant number of people becoming victims of skin diseases caused by excessive heat.

Tender coconut vendors and other cool drink sellers are having a good time as more and more people are taking to cool drinks with each passing day, even as the sun seems to show no mercy.

In great demand, the price of tender coconut has shot upto Rs. 20 a piece and the price is expected to rise even further as the summer season advances.

Meanwhile, Dr. C. Govindaraju, senior Field Superintendent of Naganahalli Organic Farming Research Centre, confirming that the temperature of the city has increased by over 2 percent in the past 20 days, said that pre-monsoon showers hold key for a cooler summer.