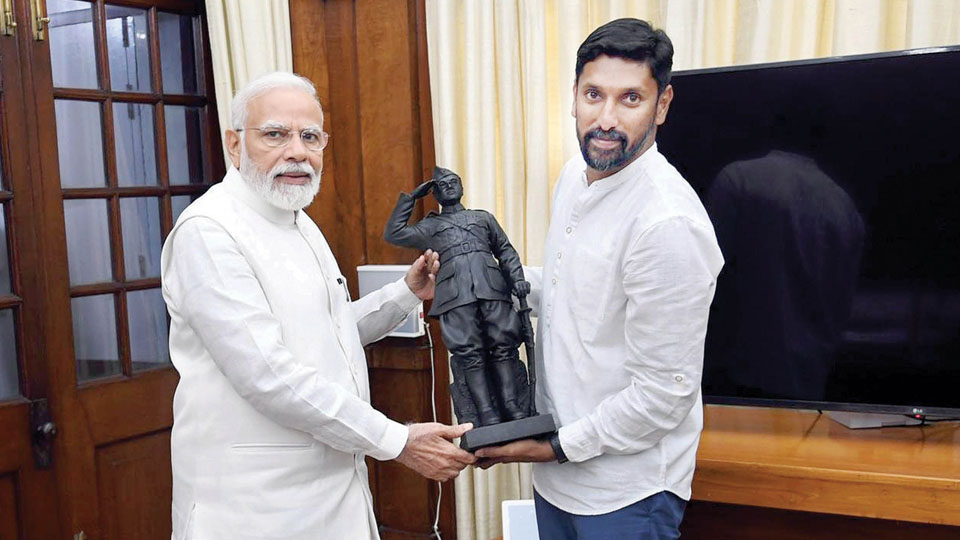 Mysore/Mysuru: City sculptor Arun Yogiraj, who had carved the 12-feet 3D statue of Adi Shankaracharya in sitting posture and was unveiled by Prime Minister Narendra Modi at Kedarnath Temple in Uttarakhand last year, had the biggest moment of his life of personally meeting Modi at his office in New Delhi yesterday.

The meeting took place at 11.30 am where Arun presented a two-feet tall monolithic statue of Netaji Subhas Chandra Bose. The meeting with the PM was facilitated by Mysuru-Kodagu MP Pratap Simha and Union Minister Pralhad Joshi.

The statue, carved with black schist (Krishna Shile), depicts a saluting Bose holding a sword. Arun took one month to carve it. Receiving the little statue, the PM tweeted, “Glad to have met Arun Yogiraj today, Grateful to him for sharing this exceptional sculpture of Netaji Bose.”  The PM appreciated Arun’s natural bond with art.

Speaking to Star of Mysore from New Delhi, Arun Yogiraj said it was a memorable experience with the Prime Minister. “The PM recalled how impressive the Adi Shankaracharya statue was and was glad for the Netaji statue. It was a brief but fruitful meeting,” he recalled.

“In fact, in November last year, after the PM dedicated the Adi Shankaracharya statue in Uttarakhand, the Prime Minister’s Office (PMO) had told me that Modi has expressed his wish to meet me in person. However, the meeting could not take place till now. The meeting happened yesterday, thanks to our MP Pratap Simha,” Arun said.

When asked why he had carved Netaji’s miniature statue, Arun said, “The statue idea germinated in my mind as soon as the PM announced that the India Gate will have a 30-ft statue of Bose. I wanted to showcase my talent to the PM.”

After Arun Yogiraj met the Prime Minister, MP Pratap Simha and his family — wife Arpitha Simha and daughter Vipanchi Simha — along with Pralhad Joshi met the PM. Arun Yogiraj too was present where they exchanged pleasantries. The PM also presented some chocolates to Vipanchi.

Arun Yogiraj Narendra Modi Subhash Chandra Bose
Will it be ‘Made in Mysuru’ statue of Netaji at India Gate?
Mega Udyoga Mela at KSOU tomorrow