Home » News » Will it be ‘Made in Mysuru’ statue of Netaji at India Gate? 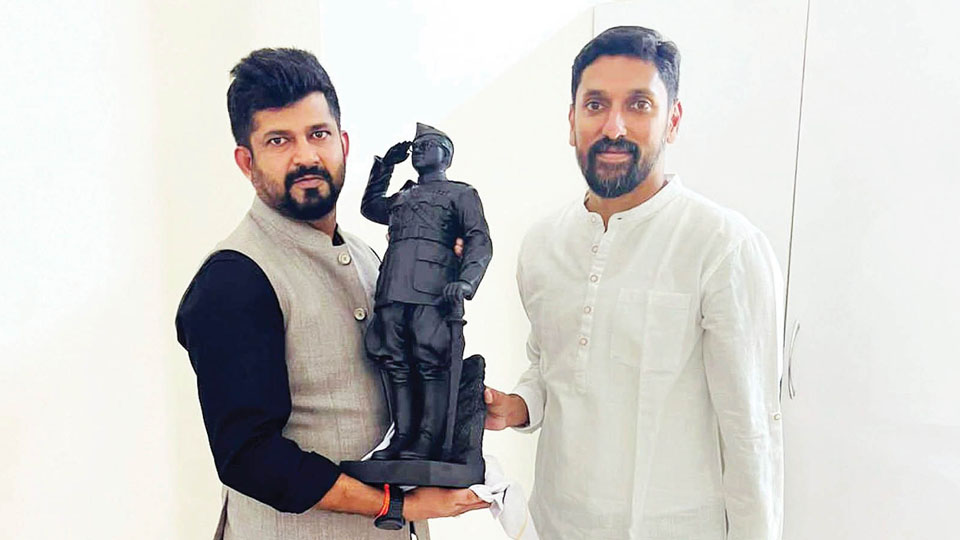 Will it be ‘Made in Mysuru’ statue of Netaji at India Gate?

Mysore/Mysuru: The responsibility of carving the 30-ft statue of Netaji Subhas Chandra Bose will be given to Mysuru-based sculptor Arun Yogiraj. This was confirmed by Mysuru-Kodagu MP Pratap Simha in New Delhi yesterday.

Arun, who has got national and international recognition for sculpting, has already presented a 2-ft miniature statue of Netaji to the PM.

“The Prime Minister has confirmed that the project to carve the Netaji Statue in India Gate will be handed over to Arun Yogiraj,” the MP told reporters in New Delhi. The official order to this effect will be issued soon, the MP added.

On the occasion of Netaji Subhash Chandra Bose’s 125th birth anniversary, PM Modi  announced in January this year that his statue will be installed at India Gate to honour his contribution to the independence movement. Until the installation is completed, a hologram of Netaji is now being projected at the site of the statue.

The statue, in black granite and the project, has been initiated by the Culture Ministry. Sculptor Arun Yogiraj told Star of Mysore that he will be meeting the senior officials from the Ministry of Culture today  (Apr. 6) regarding the work order for the statue carving.

“I am requesting them to allow me to carve the Netaji statue in Mysuru only as it will be convenient for me and also, I want people to recognise the statue as ‘Made in Mysuru work of art.’ It will be a proud moment for Mysuru and Karnataka,” he said.