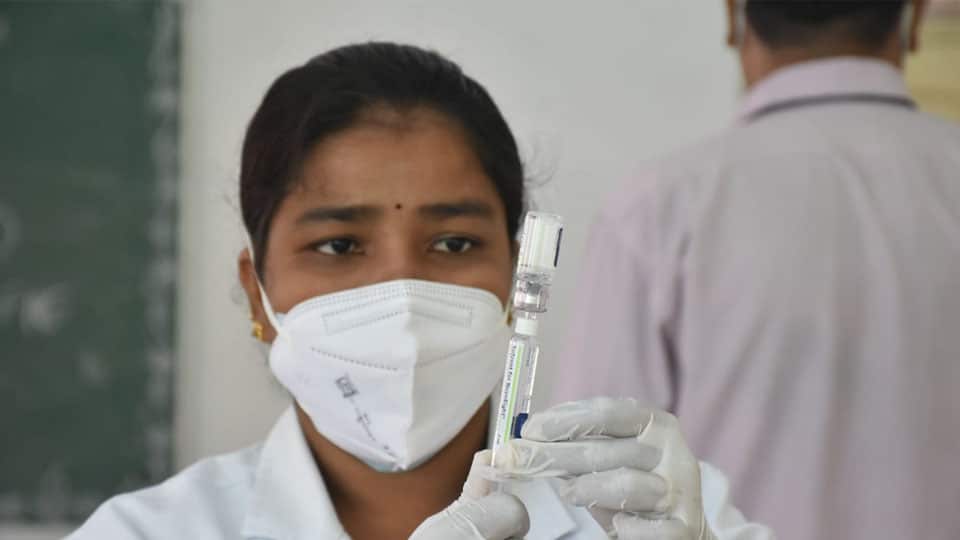 Mysore/Mysuru: Expressing his displeasure over Mysuru district failing to achieve 100 percent COVID-19 vaccination coverage even after so many vaccination drives, Mysuru-Kodagu MP Pratap Simha directed the health authorities to launch another mega vaccination drive in the district in the first week of November.

He was speaking at the Disha meeting at the ZP Hall here on Thursday.

Stating that by now, all the 18-plus population in the district should have taken the vaccine, Simha expressed disappointment that the authorities had failed in reaching the goal.

Noting that the Health Department must take this seriously, the MP directed the officials to find out the reasons for not achieving the 100 percent target and also to hold another round of mega vaccination drive in the first week of November, ahead of Deepavali.

Referring to the establishment of Kidwai Hospital branch in Mysuru, Simha asked Deputy Commissioner Dr. Bagadi Gautham to allot 50 to 100 acres of land for the purpose. He also suggested that the land can be given in Lalithadripura survey No.29  coming under MUDA or elsewhere in the taluk.

The MP also asked the authorities to service the Oxygen Plants at Super Speciality Hospital and Trauma Care Centres in PKTB Hospital premises and at the District  Hospital premises and utilise them for meeting all medical emergencies in the district. He warned that failure  in utilising them will result in gradual deterioration of machinery.

He  directed the officials to submit a proposal for Rs.72 crore required for staffing the Hospitals and purchasing of equipment.

DHO Dr. K.H. Prasad said that 21.20 lakh out of the targeted population of 24.88 lakh in the district have taken their first dose of COVID vaccine. Maintaining that the district has achieved 84 percent target, he said that about 57 of the eligible population has taken the second dose also.