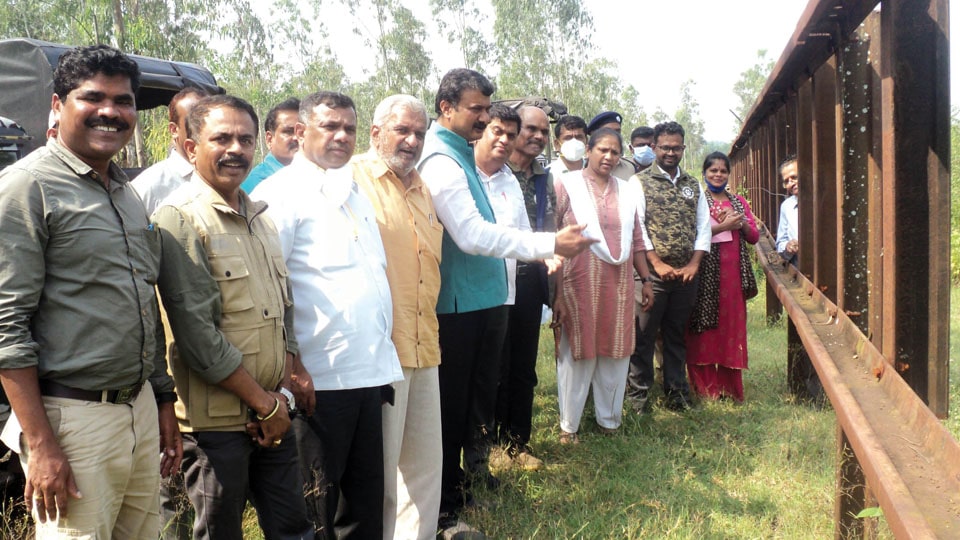 Saragur: In an effort to find a long-lasting solution to the human-animal conflict, a delegation led by Karnataka Legislative Council Deputy Chairman M.K. Pranesh, who is also the Chairman of the Petitions Committee, visited Hediyala, Omkara and Moleyur ranges of Bandipur Tiger Reserve on Oct. 27.

The team visited the areas and inspected the rail line barricades that have been laid to prevent the entry of wild elephants that cause widespread damage to the standing crops.

The Council delegation members interacted with villagers living along the forest fringes and also spoke to farmers who have been bearing the brunt of human-elephant conflict.

Speaking to reporters, Pranesh said that disbursing compensation to the loss of human life and crops remains a major issue and more than this, enabling the victims to lead a respectable and independent life is crucial. The Committee would work towards empowering the farmers, he added.

Noting that the task of rail line barricading was 80 percent complete, he said that steps will be taken to finish the remaining part of the works.

Several farmers and villagers interacted with the team and suggested ways and means to minimise the human-animal conflict that is on the rise.