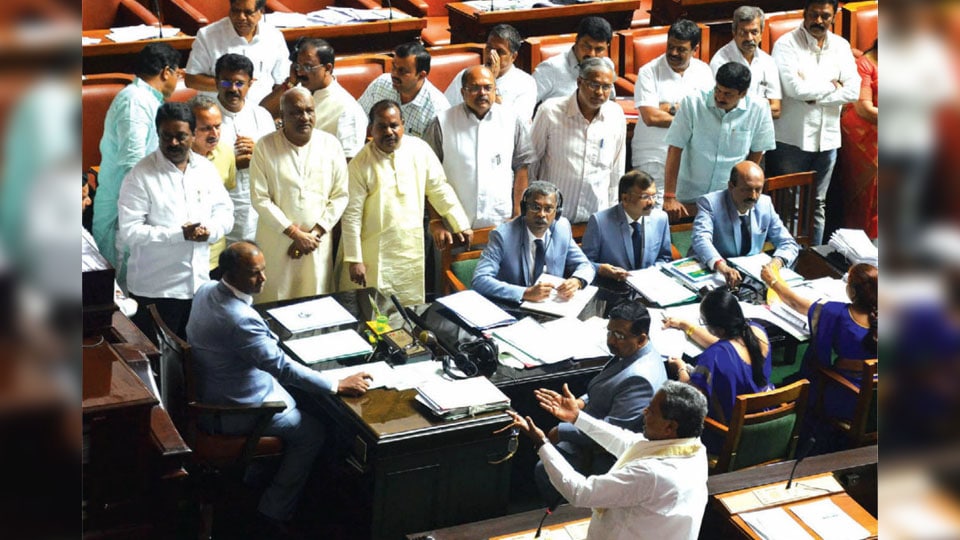 CM lashes out at BJP for disrupting Assembly proceedings

Demanding a debate on alleged ‘Diarygate scam,’ the Opposition BJP Legislators disrupted proceedings in the Assembly for the second day on Friday.

As soon as the Assembly met in the morning, the BJP members continued with their demand and raised slogans demanding a CBI probe into the contents of the diary.

Leader of the Opposition Jagadish Shettar said that the diary allegedly had notings indicating payments to the Congress High Command and the party members should be allowed to talk about it in the House.

Speaker K.B. Koliwad, turning down the request, asked the BJP members to withdraw the protest so that the House can discuss burning issues such as drought.

However, BJP members continued with their sloganeering, following which the Speaker adjourned the House for a short while.

When the House reassembled amid the din, Chief Minister Siddharamaiah lashed out the BJP Legislators saying that the people will teach them a lesson.

In a raised voice, the CM said that the BJP has been politicising the issue for publicity. “Nimma Appana Aaane (I swear on your father), you (BJP) will not come to power,” Siddharamaiah said asserting that the Congress will retain power in 2018 and he will continue as the CM.

Taunting the BJP for some of its Ministers going to prison, Siddharmaiah claimed that the BJP had looted crores of rupees while in power and criminal cases have been booked against   several BJP leaders.

Riled by the CM’s remarks, the BJP continued to raise slogans against the Government. Finally, Speaker Koliwad adjourned the House to Monday.