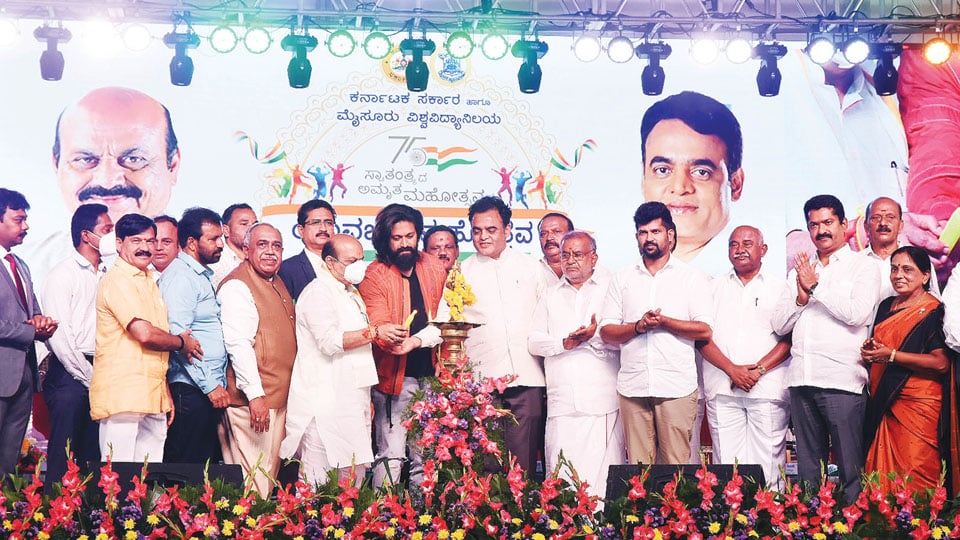 The main attraction for the crowd was actor Yash, lovingly called ‘Rocking Star’. The crowd cheered as Yash came on stage. Basking under the global success of his blockbusters KGF-1 and KGF-2, the actor waved at the crowd and the audience erupted with joy.

In his address, Bommai promised all-round development of Maharaja’s College and Maharani’s College as Higher Education Minister Dr. C.N. Ashwathnarayan requested the CM for funds. “I am committed to the development of Mysuru, be it the Mysore Airport expansion, tourism circuit from Mysuru and the overall development of the educational institutions built by the Maharajas,” the CM said.

Bommai arrived in a special helicopter from the HAL Airport in Bengaluru. With the Centre’s Har Ghar Tiranga campaign pacing up across the country, the CM brushed aside criticism against the campaign and said that the Opposition Congress has always manipulated the freedom struggle for the advantage of its own leaders. “Opposing the patriotic campaign is an anti-national action,” he said.

Speaking at the Mysore Airport this morning, CM Bommai said that every Indian must carry out the campaign with passion and respect for the country. The event should be celebrated in a meaningful way.

READ ALSO  Novel gene plan to save vultures from decimation

“It is intended to hoist the flags on more than one crore homes in the State. Congress leaders do not know the accurate history of India. They are only manipulative in their motives. We can give them accurate history lessons,” he said.

“People of the State and country very well know that Congress has always tweaked the freedom struggle to its own advantage. We will not give a chance to narrate manipulated history to the people. The Opposition has stooped to such a low that they are unable to see any nation-building and patriotic activity,” Bommai regretted.

When reporters asked about rain relief measures in Mysuru, Bommai said that he has taken a report from the Deputy Commissioner and compensation will be released for those who lost their houses. “We have released Rs. 500 crore to the Revenue Department and PWD to take up immediate relief measures. In addition, the Agriculture Department will conduct a survey on crop loss and the extent of damage and make arrangements to distribute compensation,” he added.