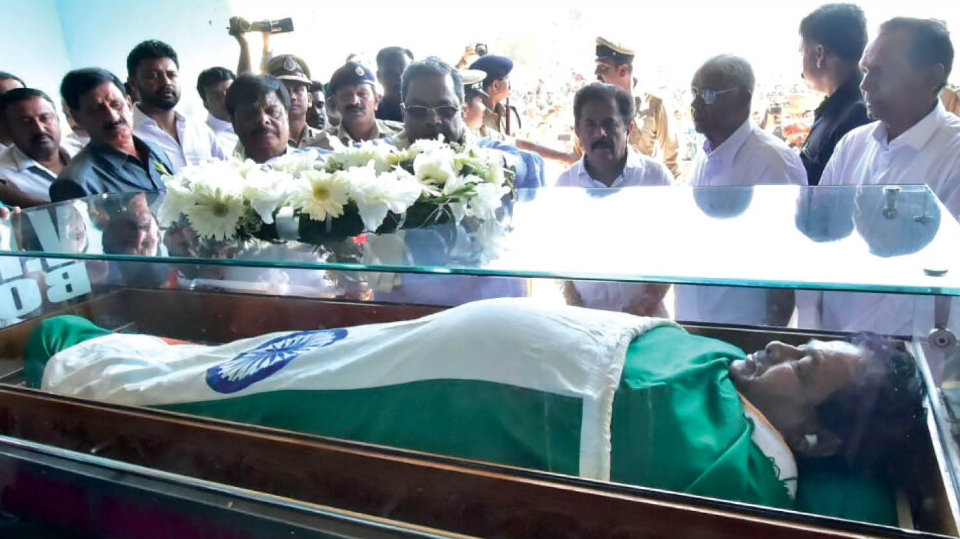 Mandya:  Chief Minister Siddharamaiah this morning visited Kyathanahalli in Pandavapura taluk to pay his last respects to farmer leader and Melukote MLA K.S. Puttannaiah (69), who died after a massive heart attack here yesterday night. He is survived by his wife, a son and two daughters. The CM placed a wreath on the departed leader’s body and later consoled the grieving family members.

Speaking to press persons, Siddharamaiah said that the State had lost a tall farmer leader.

Recalling his association with Puttannaiah ever since the farmer movement began in 1980s, Siddharamaiah said that Puttannaiah always championed the cause of farmers and his death was a great loss to the State.

Also, Minister Geetha Mahadevaprasad, BJP MP Shobha Karandlaje, MLA C.T. Ravi and other leaders of all parties were among those who paid their last respect to the departed MLA.

The mortal remains of Puttannaiah has been brought to Mysuru and is preserved at MMC&RI mortuary till Wednesday morning, as his daughters are away in the US. His last rites will be performed at Kyathanahalli on Wednesday after his daughters arrive from abroad.

Meanwhile, private educational institutions in Pandavapura taluk declared a holiday today as a mark of respect to the departed farmer leader and MLA.

Yesterday night, Puttannaiah was watching a flood light Kabaddi tournament at Sir M.Visvesvaraya Stadium in Mandya, when he collapsed. He was immediately rushed to MIMS Hospital, where he breathed his last a few minutes later. His body was shifted to his native village Kyathanahalli in Pandavapura taluk, where it was kept for public viewing for some time.

Puttannaiah, a farmer leader, took part in many farmer movements headed by Prof.K.S. Nanjundaswamy.  He later entered politics and lost the Assembly polls three times as a KRRS candidate in 1989, 1994 and 1999 from the then Pandavapura Constituency. However, he won from Pandavapura in 2004 and became an MLA for the first time.

He became an MLA for the second time in 2014 by winning from Melukote Assembly segment, earlier called as Pandavapura constituency, on Sarvodaya party ticket. He had recently merged his Sarvodaya party with ‘Swaraj India’ party and was preparing to contest the forthcoming Assembly polls.