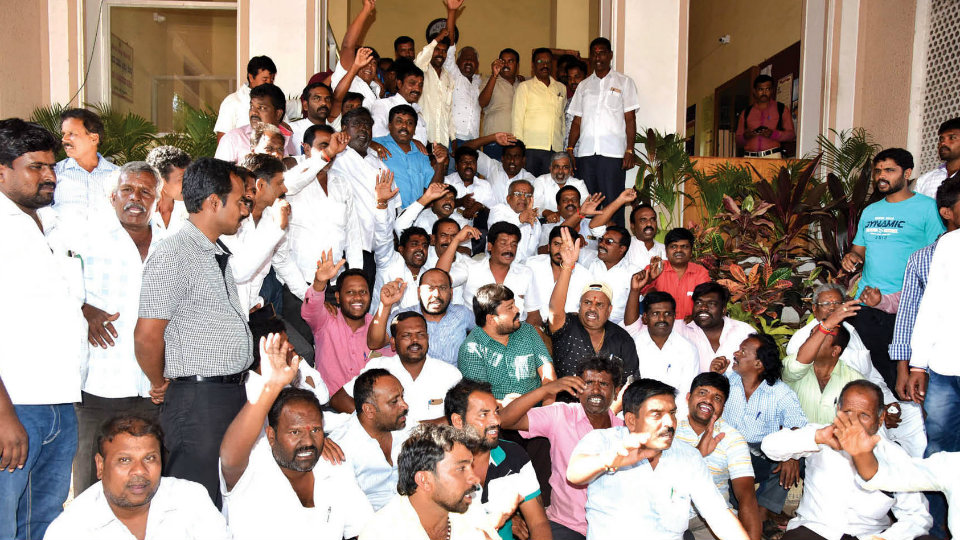 Mysuru: A clash erupted between Congress and JD(S) workers at Gejjagalli village under Chamundeshwari Assembly segment yesterday when Chief Minister Siddharamaiah’s son Dr. Yathindra, who is attempting to gain foothold in politics, visited the village to perform a puja to launch development works at Gejjagalli, leading to a scuffle between Congress and JD(S) workers.

The puja was being performed to lay the foundation stone for development works worth Rs. 15 lakh for a road and drainage at Gejjagalli, which is a Lingayat-majority village off Mysuru-Nanjangud Road.

While the ceremony was on, JD(S) activists, led by Gram Panchayat member Lokesh, arrived and asked Yathindra why local elected representatives were not invited to the event. Yathindra tried to speak to them but altercations broke out between the workers of the two parties.

Heated arguments between the party workers then escalated into a clash. Lokesh was injured in the melee. However, the Police intervened and brought the situation under control.

JD(S) workers alleged that the Police assaulted Lokesh based on the directives of K. Marigowda, a close confidante of the CM. Following the incident, JD(S) workers, including MLA G.T. Devegowda, sought the suspension of the Police personnel who assaulted the member and staged a protest in front of the SP’s office.

They alleged that though the village comes under Chamundeshwari constituency represented by JD(S) MLA G.T. Devegowda, the development works are being inaugurated by Yathindra, who is nowhere connected with the constituency. As the CM is planning to contest from the segment, he is misusing power, they alleged.

“Despite this, the Police and the administration have facilitated the foundation laying ceremony at Gejjagalli and going a step further, the Police even provided protection to those persons who are in no way connected either to the State Government or to the local administration,” he alleged.

Demanding immediate suspension of Circle Inspector Karim Ravathar for not respecting elected representatives and acting as a crony of politicians, the MLA said that CM Siddharamaiah is desperate to win in Chamundeshwari in the elections and is trying all means to purchase voters, he alleged.

Protests continued and many attempts to convince them to withdraw failed. SP Channannavar assured of action against the Inspector after an enquiry and Southern Range IGP too assured of action. This, however, did not pacify the protesters.

DC Randeep came to the protest venue and admitted that there was a lapse in protocol and such incidents will not be repeated, he assured. The protesters relented after the DC assured of action. ZP members Beerihundi Basavanna, former Mayor M.J. Ravikumar, Corporators K.V. Mallesh, S.B.M. Manju and K.T. Cheluvegowda and others   were present.