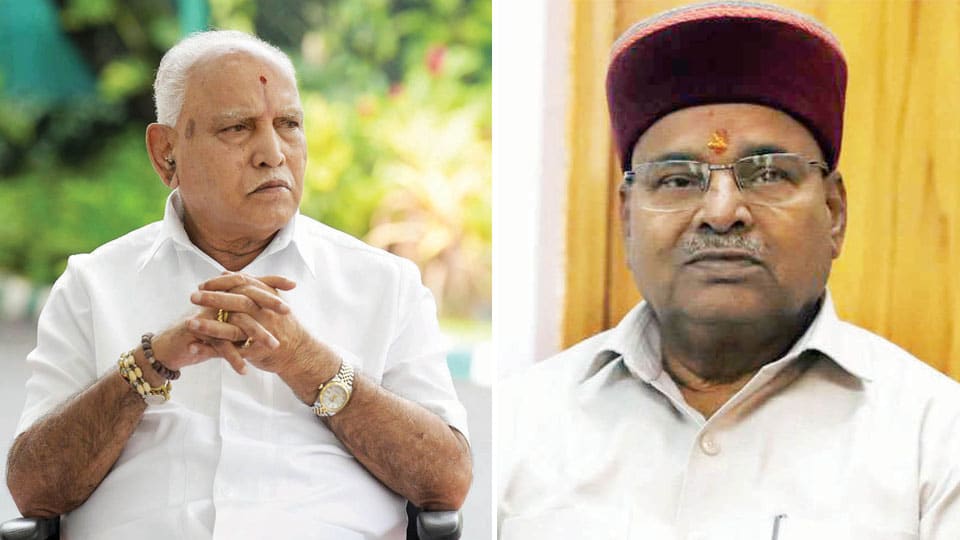 Amid talks of his exit, B.S. Yediyurappa says privileged to be loyal worker of BJP

Bengaluru: In what seems to be the clearest hint so far about Chief Minister B.S. Yediyurappa stepping down, the CM will meet Governor Thaawar Chand Gehlot at the Raj Bhavan here on July 26 at 11 am. On July 26, Yediyurappa Government completes two years in office and he is the BJP’s first and only Chief Minister in South India.

Reports in Bengaluru this noon said that the Governor has granted an appointment to the CM and political analysts say that Yediyurappa is likely to submit his resignation to the Governor, paving way for a new Chief Minister chosen by the BJP leadership to govern for  two more years.

The CM today said that he was expecting a message and instructions from the High Command on July 25, a day before his Government completes two years and from the 26th, he will “do what the High Command says and focus on building the party.” The CM was initially scheduled to attend a Legislature Party meeting on July 26 and hold a luncheon with MLAs on July 25 but the programmes have now been rescheduled.

This morning, Yediyurappa asked his supporters not to protest for him or bat for him. “Mutt Seers have backed and blessed me. This has never happened before,” he added as he thanked the High Command which allowed him to continue even after attaining the age of 75, a self-imposed criterion of BJP.

Clearly giving a hint of his exit, Yediyurappa appealed to the party workers, fans and followers not to stage any demonstrations or resort to any other activities that are harmful for the party. The CM did not comment on whether he had laid down any conditions before the party High Command before quitting.

“I am privileged to be a loyal worker of the BJP. It is my utmost honour to serve the party with the highest standards of ethics and behaviour. I urge everyone to act in accordance with party ethics and not indulge in protests/indiscipline that is disrespectful and embarrassing for the party,” Yediyurappa said

Yediyurappa travelled to Delhi over the past weekend and was reportedly told by party leaders and Prime Minister Narendra Modi that he should work towards bringing the BJP to power again — in what is being seen as a sign that the BJP is expecting the 78-year-old veteran to resign of his own volition in the coming days.

He has been facing what was seen as hostility from some BJP MLAs. Some leaders including MLA Basanagouda Patil Yatnal, Tourism Minister C.P. Yogeeshwar and MLC A.H. Vishwanath has spoken against Yediyurappa, despite warnings of disciplinary action by the leadership.

They had hit out at Yediyurappa and said his son and party State Vice-President B.Y. Vijayendra was “running the Government in Karnataka.”

Yesterday, Yediyurappa met Veerashaiva-Lingayat community Mutt chiefs. The community, which comprises 16 percent of the State’s population and is seen as the BJP’s big support base in the State, are backing the Chief Minister. Several of them have warned the BJP against any move to dislodge Yediyurappa, who also belongs to the community.