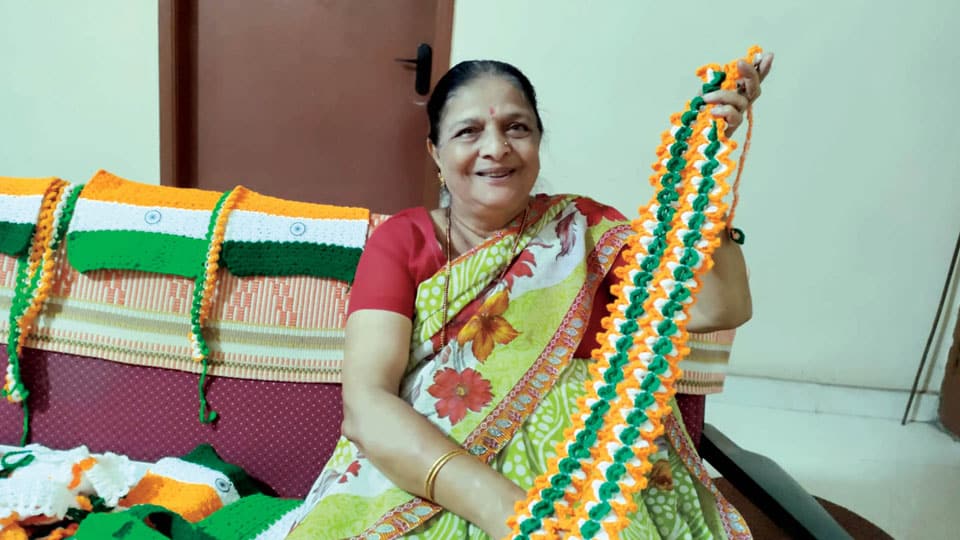 There are various ways to show Patriotism. One may wonder what a common man or woman can do for the country except extolling the sacrifices made by the freedom fighters and the defence forces, penning down inspirational poetry expressing love for the country, and saluting the National Flag on Independence Day at the community functions.

Well, these are only a few ways of showing love for the country. Patriotism means different things to different people. One such proud citizen of India and a resident of Mysuru is Dr. Manik A.V. Bengeri, who wants to commemorate the 75th year of India’s Independence in a novel way.

Well-versed in the art of crochet, this septuagenarian decided to make use of her skill to not just exemplify her patriotism but also generate funds for the Army through her skill.

The handmade crocheted items such as National Flags, key chains, badges, car hangars, garlands, wrist bands, all in the colours of our National Flag and complete with the Ashoka Chakra, are up for grabs. The proceeds from the sale of these crochet pieces would go to the Army corpus fund.

Opening boxes after boxes, Dr. Manik Bengeri showed me her labour of love. Displaying them proudly on the bed, she explained the intricacies in design and inspiration behind each piece. Depending on the length, size and pattern, the time taken to crochet each piece ranges from five hours to five days.

I was awestruck not just by the enormous effort and time taken towards this mission, but also by her risk-taking attitude as the investment is not the time alone but also the yarns of wool in the colours of the Tricolour and other ingredients.

‘What if these items are not sold?’ I can’t help asking though I doubted anyone could resist such exotic creations. ‘These are being sold like hot cakes and only through word of mouth,’ the proud creator says with a spark in her eyes. ‘These knick-knacks are perfect for Independence Day gifts to both children and adults.’

Dr. Manik Bengeri, who set on this mission six months ago, has crocheted about 600 pieces. ‘Half has been sold but I’m still making them,’ she tells with unbounded enthusiasm.

‘Don’t your wrists pain by working on this continuously?’ I ask, and in reply she points out at a bottle of anti-pain spray on the table.

This is not the first time this senior citizen has undertaken such an honorary venture. At the age of 12, when she was asked by her school teacher to collect funds for Goa Liberation, she made garlands out of fresh marigold flowers and sold them to generate funds. The seed capital was given by her father. The exercise was repeated at the time of Indo-China war too. ‘But for India’s 75th Independence Year, I wanted to create something permanent which people can gift and preserve. If my effort can inspire even one person to contribute to our country in a small way, this pain is worth it,’ says the proud citizen of India.

Dr. Manik Bengeri wears many hats — she is a qualified Hindustani music teacher, undertakes teachers’ training classes for Government school teachers and has authored nine books in Hindi, Sanskrit, Marathi and Kannada on moral values and culture. She is the recipient of Ramnath Goenka Sahitya Ratna Award for Literature in 2016.

Born and brought up in Belgaum (now Belagavi), Dr. Manik Bengeri became the bread-winner of her family at the age of 20. Later, along with her bank job, she did Master’s and Ph.D in Hindi, graduated in Hindustani classical music and also obtained a diploma in journalism from University of Mysore. Her day is packed with teaching Sanskrit and Music, researching for her books and writing articles on art and culture. She also teaches crochet. So, if you want to wear Nationalism literally on your sleeve, do reach her on Ph: 0821-2542997 or e-mail:[email protected]