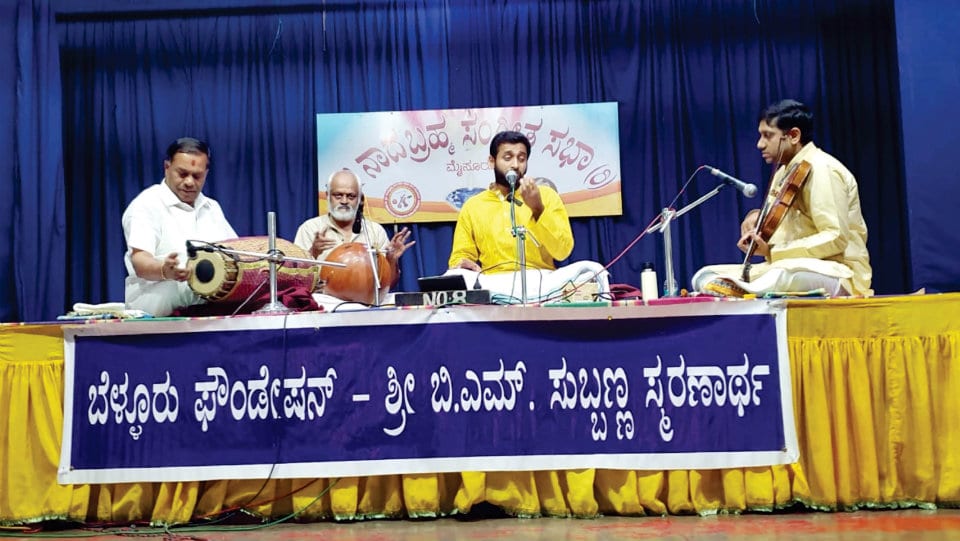 Concert with Melody and Merit

He began his recital with a varna in Abhogi followed by a kriti in Nata. Next he took up Daari nee Telusu in raga Shuddha Saveri with crisp swara prasthara.

Vidwan M.D. Ramanathan’s kriti in Kedara raga – Tyagaraja gurum ashraye – a less heard one was beautifully rendered by the artiste. Reetigowla ragalapana was very melodious followed by Mamahrudaye in Khanda Triputa tala, a kriti of Mysore Vasudevacharya, an apt one for the bhavana.

After a brisk kannada gowla kriti of Tyagaraja  – Sohasujooda tarama – Vivek detailed Todi raga with Tyagaraja’s Kaddana variki kriti with neraval and kalpana swaras at Muddugaru Tamboora batti with all the niceties of the raga. The tani avarthanam at this juncture: mridanga by Vidwan Cheluvaraj and ghata by Vidwan G.S. Ramanujam was scholarly and melodious.

A short rendering of a ragam tanam pallavi in Begade (rarely chosen for RTP) – Venkatarama Sankataharana Tirupati in Misra Chapu tala exhibited the merits of both the vocalist and the violinist  Vidwan B.K. Raghu. The ragamalika kalpana swaras in ragas Devamanohari, Andolika in anuloma viloma patterns were very melodious.

A devaranama of any Haridasa would have been a welcome addition to the Kannada-loving audience!

The reverberating full-throated singing with clarity in diction were the major merits of this youngster,  added to his melodious Bhakti-charged lyrics’ rendering. Vivek has a visibly bright musical career ahead.

B.M Subbanna Memorial Concert Bellur Foundation
When God says no, he has better plans for you
Classical dance treat by Naatya Sabha on Jan.11