Rainfall, mist and fog in Kodagu are not occasional. Every year it rains and even if there is a change in weather pattern, it rains for sure. And this is the reason for verdant greenery all over Kodagu that enables people to cultivate the staple food crop paddy and also other commercial crops like coffee, pepper etc., to sustain livelihood.

But this year, in August, the tiny district of Kodagu witnessed unprecedented rainfall and it led to a natural calamity. As a result, there were many landslides and flash floods that uprooted thousands of acres of coffee estates and flattened  the hillocks. Old valleys and villages were swept away, rivulets changed their course and trees, unable to face high velocity winds, fell like ninepins. Hundreds of houses were washed away and many lives were lost in a phenomenon that was unheard of before in Kodagu.

Well, the State Government and the District Administration have done their best to rescue and rehabilitate flood and landslide victims. Kodagu District In-charge Minister S.R. Mahesh, who stayed in the district during the crisis, ensured that the official machinery came to the rescue of hapless victims. The Government is now setting up a government body known as Kodagu Reconstruction Authority, an independent body for reconstruction and rehabilitation measures. This decision augurs well for the development of this devastated district and brings hope to the victims of this natural disaster. Minister S.R. Mahesh and Chief Minister H.D. Kumaraswamy must be complimented for this. Let it be.

But, amidst the talk of rehabilitation and reconstruction, there is one issue that needs urgent attention. The future of Old Private Bus Stand at the heart of Madikeri town. I had read in newspapers that the more than 100-year-old bus stand, located at a narrow and congested place under the looming shadow of a hillock at a junction of three roads had also suffered landslide and is now shifted to another location. While one road goes towards Government Central High School (Mans Compound), the other one is the Main Road of Madikeri that leads to Mahadevpet and the third road is Old Kohinoor Talkies Road. Due to heavy rainfall this year, the hillock behind the one-storey Bus Stand building came down and the building collapsed and stood precariously posing danger to people and traffic.

Following this, the authorities from the City Municipal Council of Madikeri have now demolished the building and shifted the operations of Private Bus Stand to another place. Now that once congested place crowded with people and buses wears a deserted look but gives the people a much-needed breathing space, a lung space.

It is now time for the elected representatives, officials and Kodagu District Minister S.R. Mahesh, who is also the State Tourism Minister, to think about the future use of this vacant space where the old private bus stand once stood. The politicians with personal agenda, ever kowtowing officers and the greedy contractors are already scheming to gobble up this prime space. According to one report, the Madikeri City Municipal Council (CMC) has already prepared a Detailed Project Report (DPR) to construct a huge commercial complex at this vacant place. Fortunately, the plan has been temporarily shelved as there is no money in the CMC coffers to build this commercial complex. But the danger of the commercial complex being constructed under the Public-Private-Partnership, to overcome the financial crunch, is there and cannot be ruled out. Here lies the danger. 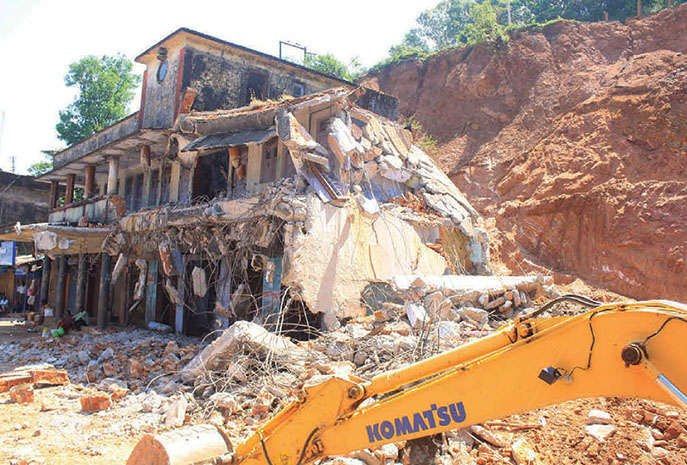 The Old Private Bus Stand building in Madikeri being demolished.

Several intellectuals and thinking  people, who have concern towards Madikeri and its environs, have questioned the logic behind the CMC’s plan to construct a commercial complex in this open space. City planners, public administrators and civic authorities must not be money-minded nor money should be the driving concern for all sorts of development in the name of generating financial resources for the CMC or providing infrastructure. That kind of development would be anti-environment and anti-people. This kind of development will not provide quality-life to the people living in Madikeri. It will not make Madikeri a “livable city.” They must take public good into consideration while planning and executing city development. Here is my suggestion in this regard.

Why can’t this now vacant old bus stand (in this case thanks to nature’s fury!) be converted into a beautiful Public Square? Instead of constructing a commercial complex here, where three roads meet and form a junction, an open space can be created leaving out the road space. An ornate iron enclosure can be built around the open exclusive space for the tourists and the local people to sit and relax spending some quality time after shopping or other errands.

If you see many cities abroad and even in small towns in India, in open spaces Public Squares are created adding to the aesthetic value of the city or town. Even in our own Shimla and Darjeeling, we can find such Public Squares.  Except Raja’s Seat, which too is getting encroached, there is no such open space in down-town area of Madikeri. Now there is a God-given opportunity. This open space in Madikeri can be transformed like the Trafalgar Square in London that has become a must-see for a visitor to London.

Our intellectuals, politicians and the city planners should think on these lines and use this space rather than converting it to a commercial complex area. If a Trafalgar Square-like space is created, I am sure, it is bound to draw the people for recreation and rest. By the way, Trafalgar Square is at the centre of London city and its original name was Chairing Cross. The Trafalgar Square that was built in honour of Admiral Nelson has a giant pillar at the centre and the entire Square is a meeting point for tourists and local residents alike.

Like Trafalgar Square, why not a Public Square be built at Madikeri’s Old Private Bus Stand in honour of India’s first and one and only Indian Commander-in-Chief, Field Marshal K.M. Cariappa who is from Kodagu? 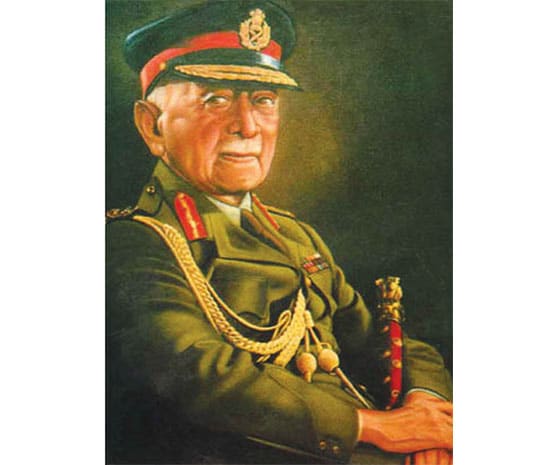 A statue of the Field Marshal can be placed atop a very high pedestal in the middle of the fountain, proposed by the District Minister S.R. Mahesh, so that it would enhance the beauty of the spot. A Public Square (Field Marshal Square like Trafalgar Square) dedicated to Field Marshal K.M. Cariappa will be most proper and is bound to attract the tourists and at the same time make the local residents proud that they have paid a befitting tribute to the great soldier. If implemented, Field Marshal Square in Madikeri will also have one more must-visit destination. Think about it.