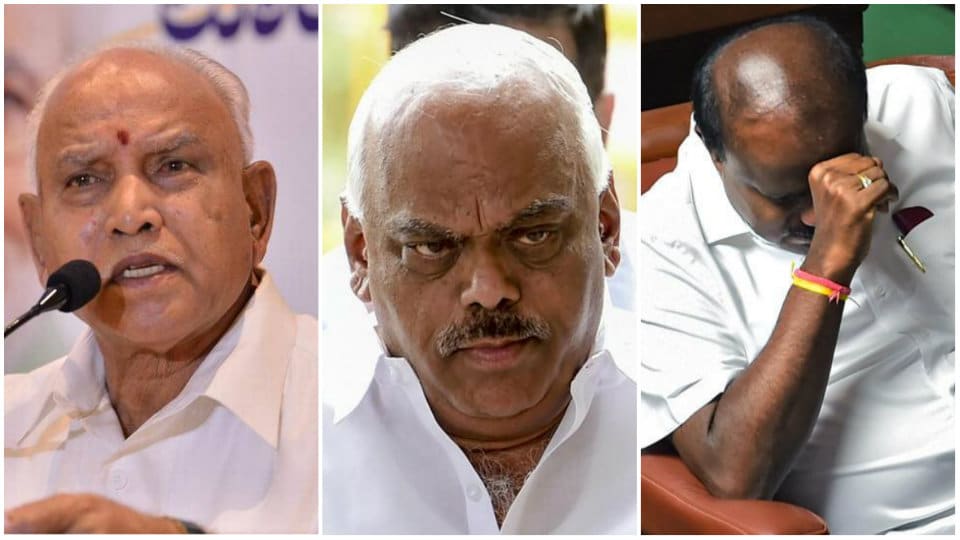 Bengaluru: With the fate of the H.D. Kumaraswamy-led Coalition Government in Karnataka likely to be decided tomorrow, political parties are preparing their strategy and plan of action for the crucial Trust Vote.

While hectic parleys continued in Coalition circles with leaders of both Congress and JD(S) holding meetings, State BJP Chief B.S. Yeddyurappa too met party MLAs and held discussions on the plan of action when the Assembly resumes tomorrow.

The Coalition leaders are also said to be making last ditch efforts to reach out to rebel Legislators camped in Mumbai, whose resignations have pushed the Government to the brink of collapse. The Coalition, therefore, appears to be gearing up to raise more Constitutional and legal issues to bide time and delay the Floor Test. Yesterday, senior Congress leader Ramalinga Reddy held talks with JD(S) Supremo H.D. Deve Gowda.

Reddy withdrew his resignation earlier this week, and the Coalition is said to be banking on him to lure back other Bengaluru MLAs — S.T. Somashekar, Byrathi Basavaraj and N. Munirathna. But hope looks bleak.

The Coalition also plans to raise the recommendations of the Sarkaria Commission as part of its effort to stonewall Governor Vajubhai Rudabhai Vala’s order for the Floor Test.

The Commission has recommended that the Governor can ask the Chief Minister to take a Floor Test within a “reasonable” time, which can mean up to 60 days in special circumstances. And the Coalition argues that this is a special circumstance. The Congress has convened its Legislature Party Meeting today to discuss tomorrow’s Confidence Motion.

Before adjourning the House on Friday night, Speaker K.R. Ramesh Kumar made it clear that finality would be put to the motion of confidence moved by Kumaraswamy on Monday and the matter would not be prolonged under any circumstances, to which the  government agreed.

Meanwhile, if the BJP, which is waiting in the wings to form its government, finds success in hatching its plan, the Congress-JD(S) coalition will be down to 98 when Kumaraswamy takes the Floor Test.

According to sources, the plan is to get some legislators of the ruling coalition to abstain during the Trust Vote. The coalition has been on the edge after Congress’ Kagwad Legislator Shrimant Patil informed Speaker Ramesh Kumar that he was unwell and will not be able to attend the remaining part of the ongoing session till July 26.

Also, there is uncertainty on whether Congress’ Bellary legislator B. Nagendra will make it for the Trust Vote. He is undergoing treatment in a hospital amid speculation that he may join the rebel camp. Meanwhile, the lone BSP MLA from Kollegal N. Mahesh today said that he will not be attending the vote of confidence and will stay neutral.