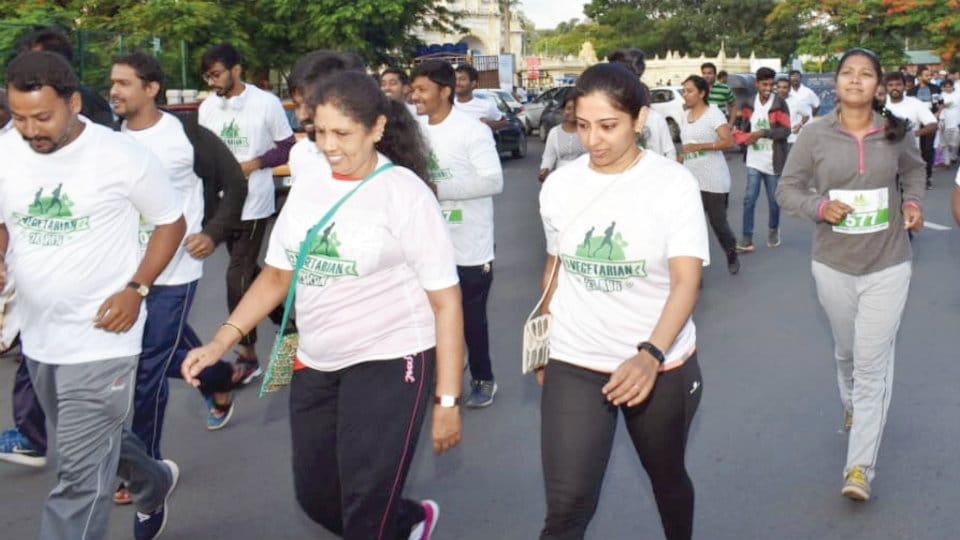 Mysuru: A considerable health-conscious population in city is steadily growing wary of meat as they are taking to a vegetarian diet. They are popularising healthy eating, which usually means a meatless, organic and environmentally-friendly diet.

As part of a campaign encourage people to ‘Go Vegetarian,’ a 2K run was held in city this morning. The run was held to promote vegetarianism and its benefits with an ultimate wish to see the world where there is no violence.

Today’s run was 391st event in Mysuru and it was flagged off by Maha Shatavadhani Munishri Ajitchandra Sagar at Kote Anjaneyaswamy Temple.

Not only vegan promotion is done for healthy living but its   link to the reduction in carbon foot prints is also explained through the run.

Explaining about vegan life style, organisers said “Vegetarians do not eat meat, fish, or poultry. On the other hand vegans, besides being vegetarian, do not even use other animal products and by-products.”

In fact, the true Jains are ethical vegans since they not only follow a vegan diet, but extend the vegan philosophy of animal compassion into their lives and oppose the use of animals and animal products for any purpose. They also believe that industrial farming of animals is cruelty and a practice that is environmentally damaging and unsustainable, organisers claimed.

“Strict Jains do not eat any root vegetables like potatoes because smaller insects are killed in their harvest and the vegetable itself have bacteria. Moreover, cooking or eating at night is also discouraged among the Jains because insects are attracted to the light at night,” they said.