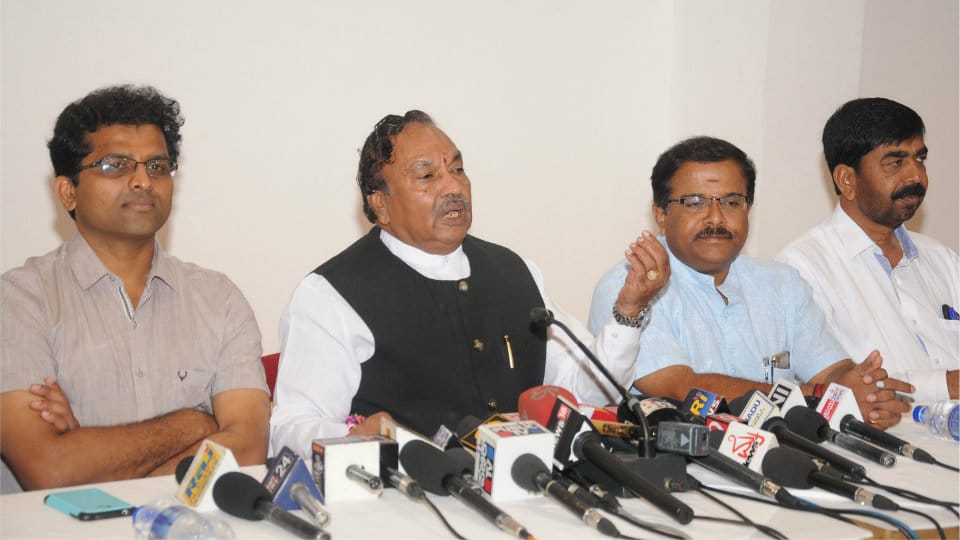 Accusing the Congress of making false promises to dalits, senior BJP leader and former Deputy Chief Minister K.S. Eshwarappa today questioned the Government why it had not made public the Backward Classes Commission report.

Addressing the press meet at Hotel Southern Star here this morning, Eshwarappa said that CM Siddharamaiah’s latest announcement that the Congress Government is working on providing 72 per cent reservation was merely an eye-wash as it is not possible under the provisions of the Constitution.

Alleging that the State Government had spent only Rs. 9,000 crore out of the Rs. 19,000 crore allotted in 2016-17 budget, the BJP leader said that the Congress has all along  been cheating the dalits, as Congress’ plans for the upliftment of dalits and the poor have remained only on paper.

Alleging that in the Rs. 54,000 crore Wakf Board scam, several Congress Ministers and minority community leaders are involved, Eshwarappa said that the government was very much reluctant to act on Anwar Manipaddy report, which exposed the scam.

Accusing PWD Minister Dr. H.C. Mahadevappa and his son Sunil Bose of being part of sand mafia, he pooh-poohed Siddharamaiah for claiming himself to be a champion of the dalits, while doing nothing for their upliftment.

Replying to a question on Rayanna Brigade, Eshwarappa said the Brigade was not an  associate of the BJP.

Maintaining that anyone can join the Rayanna Brigade, he said that the differences between him and B.S. Yeddyurappa was a thing of the past and that BSY has agreed to take back the suspension of party leaders who associated themselves with the Brigade.

Claiming that the Congress was spending huge money for the Nanjangud and Gundlupet by-polls, Eshwarappa said that BJP will be the ultimate winner by bagging both the seats.

bypolls K.S. Eshwarappa Siddharamaiah
“Future of gen next depends on creative intelligence”
By-polls are not a battle between individuals but ideologies: Congress MLC