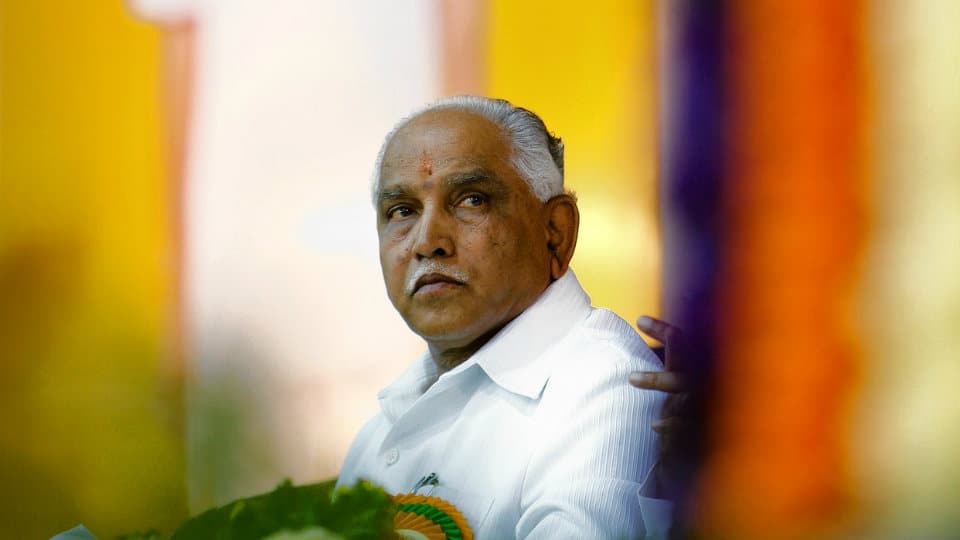 Accusing the Congress Government of rampant misuse of administrative machinery in the Nanjangud and Gundlupet by-polls, former CM and State BJP President B.S. Yeddyurappa said that the Congress victory in the by-polls was only a temporary phase.

Speaking at a thanksgiving programme organised by the BJP at  Yatri Bhavan on Ooty Road here yesterday, Yeddyurappa alleged that Congress spent crores of rupees to win the by-polls.

Alleging that Chief Minister Siddharamaiah was hell bent on defeating V. Sreenivasa Prasad in Nanjangud either by hook or by crook, Yeddyurappa said CM Siddharamaiah need not boast of victory for long as the electoral success was only a temporary phase.

Maintaining that the by-poll was the worst case of misuse of administrative machinery and Police in his over four decades of political  career, Yeddyurappa pledged that he would not rest until the Congress Government in the State was thrown out of power.  Stating that he would give his best for achieving BJP’s ‘Mission-150’ goal in the 2018 Assembly polls, he said that BJP National President Amit Shah has given some tips on winning the 2018 Assembly polls at the party national executive meeting  held in Bhubaneswar recently.

Announcing that the party will begin preparations in full swing from August, Yeddyurappa said CM Siddharamaiah, who got worried over the  people’s response to the Apr. 6 BJP rally at Nanjangud, spent crores of rupees in the last two days before the election.

Alleging that Siddharamaiah, who has time to visit hotels of his choice, had turned a blind eye to the drought situation, the BJP strongman lashed out at the State Government for failure on all fronts.

Former Minister and defeated BJP candidate V. Sreenivasa Prasad in his address, alleged that the Congress had ‘purchased’ more than 1 lakh voters by paying them huge money.

Accusing the CM of resorting to unfair means for getting him (Prasad) defeated, Prasad said he had never witness such a scale of misuse of power in his over four decades of public life.

Alleging that the Congress bribed over one lakh voters in Nanjangud constituency to ensure his (Prasad) defeat, Prasad asked Siddharamaiah to introspect on the electoral malpractices of the Congress.

Bengaluru, Apr. 18 – Stung by the defeat in Nanjangud and Gundlupet by-polls, former CM and State BJP President B.S. Yeddyurappa has convened a meet at the party headquarters here on Apr. 23, to introspect on the unexpected loss.

Yeddyurappa is said to have convened the meeting at the instance of the party top brass.

District Unit Presidents of Mysuru and Chamarajanagar, party in charge and leaders of both the districts have been asked to attend the meet, it is learnt.