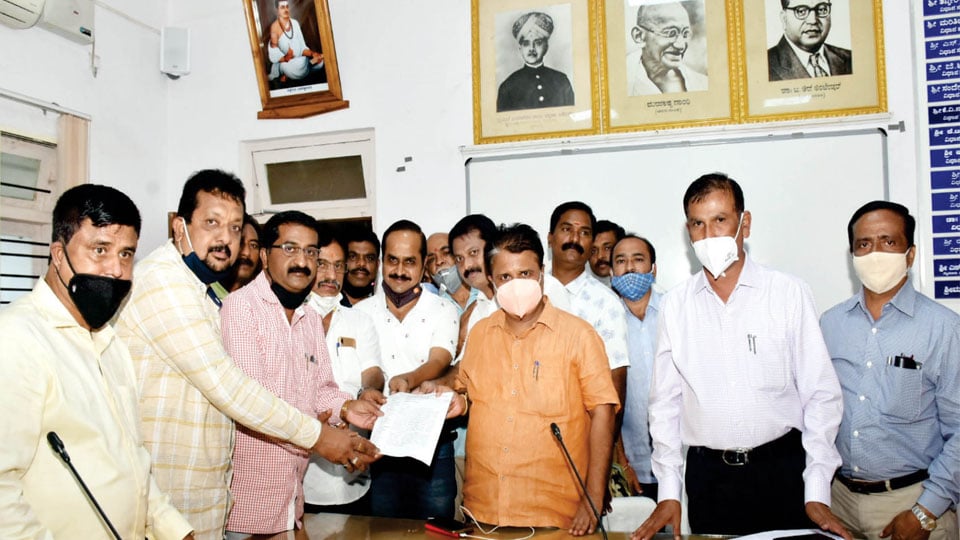 ‘Contractors who finish works on time will have no problems’, says MUDA Chairman H.V. Rajeev

Mysore/Mysuru: Assuring that Contractors who finish works within stipulated time will have no problems in the future, Mysuru Urban Development Authority (MUDA) Chairman  H.V. Rajeev said that the MUDA is committed for a transparent administration.

He was speaking at a meeting with MUDA Contractors here yesterday.

Warning that contractors  who fail to maintain quality in the works will be blacklisted, Rajeev stressed on the need for maintaining quality at every level in the execution of works.

MUDA Contractors Association submitted a memorandum containing their charter of demands, to the MUDA Chairman.

Association office-bearer Puttaswamy said that Contractors were facing a lot of hardship due to COVID-19 induced nationwide lockdown.

Pointing out that there were over 250 MUDA Contractors, he said that hardly a few contractors were awarded works. Claiming that most MUDA Contractors have no work for the past two years, he urged the Chairman to award piece-work contract to all the Contractors and thus save them from becoming penniless.

Association Director K. Ravi said that their bills must pass through 21 tables before sanction. Contending that long delays in payment of bills were deeply hurting the contractors, he urged for distribution of works among all contractors. He also wanted MUDA to simplify the entire process right from awarding contract to payment of bills.

Maintaining that officials who pressurise contractors to complete the works within the set deadline, do not show the same will in clearance of bills, he wanted MUDA to introduce a mechanism where contractor bills are cleared quickly.

The contractors submitted a memorandum containing their charter of demands, which included inviting tenders that favoured local contractors, awarding of piece-work contract up to Rs. 5 lakh, cancellation of package tenders, an end to delay in issuance of work orders, greater transparency in Accounts section and an end to the delay in release of EMD Deposits, among others.