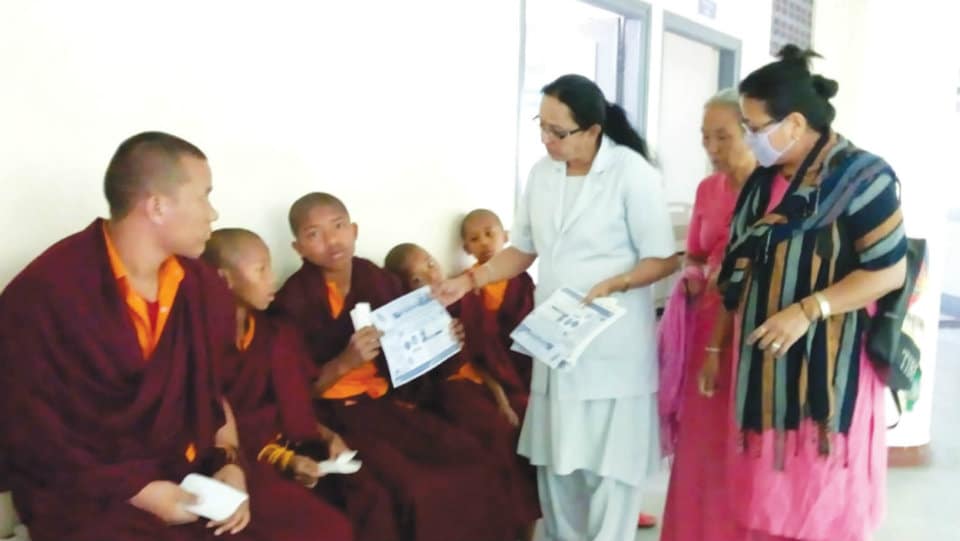 Madikeri: Even as Kodagu district administration is taking all necessary measures to stop the spread of the Coronavirus which is causing havoc across the globe, with more than 5,000 people having lost their lives so far, the Health Department has kept a close watch on Bylakuppe Tibetan Camp near Kushalnagar, where scores of Tibetans are staying.

Tibetan monks from Bylakuppe frequently visit their homeland Tibet that shares its border with China, the epicentre of COVID-19 and as such the Health Department is leaving no chances and are going about educating the camp inmates on the measures and precautions to be taken for preventing the spread of the Virus.

They have also kept a close watch on the health of Tibetan monks who have returned from Tibet. With the famous Golden Temple located in the Tibetan Settlement, a good number of foreign tourists, apart from domestic tourists visit the spot to have a glimpse of the magnificent temple. As such, the foreign tourists too are being educated on the measures to be taken. Also, regular screening and health check-up camps are being conducted in the Colony and those with early symptoms are being quarantined as a safety measure.

In a related development, the administration of Sera Jey Monastery said that it is taking all measures to follow all Government advisories in view of the prevalent COVID-19 health crisis and subsequent notices by the authorities. The Monastery has  requested devotees, visitors and guests to avoid visiting the Monastery and its premises during the ‘Hayagriva Retreat Ceremony’ from Mar.12 to 22.

It has also advised public to refrain from going to crowded places and avoid taking part in big events and to seek medical help as soon as possible if they show symptoms of flu, cough and fever.

Meanwhile, the district administration has issued a circular to all Gram Panchayat PDOs of the district on the precautionary and safety measures to be taken.

The PDOs have been asked to stop sale of food in the open along the streets, ensure minimum usage of use-and-throw articles, check sale of mutton and chicken in the open and prevent sale of cut-fruits kept in the open.

The public are advised not to be part of large gatherings and the parents have been asked not to bring their wards to markets, as a safety measure. Following the circular, Somwarpet Tahsildar Govindaraju has banned weekly shandies in the taluk.

With foreign tourists held up in Resorts, Home Stays and other lodging facilities, Kodagu Deputy Commissioner Anees Kanmani Joy has sought information from the owners about the stay of foreigners in the district. All tourism stakeholders have been asked to immediately furnish all information that they have regarding the stay of  foreign tourists on Mob: 88924-94703.

Even though the district administration has announced a partial lockdown of the district shutting down all major tourist spots and pubs, bars etc., the tourists arriving at Madikeri seem to be not bothered about the restrictions, as they continue with their enjoyment by partying in the open.

With the entire State under a partial lockdown, a group of tourists who had come to Madikeri from elsewhere a couple of days ago, were seen enjoying by the side of their cars that were parked on the road leading to Indiranagar from Raja Seat, one of the most prominent tourist spots in Madikeri.

But members of the public, who were witness to the merriment, were seen objecting the act of the party-goers  at a time when the State has declared a medical emergency following COVID-19 pandemic.