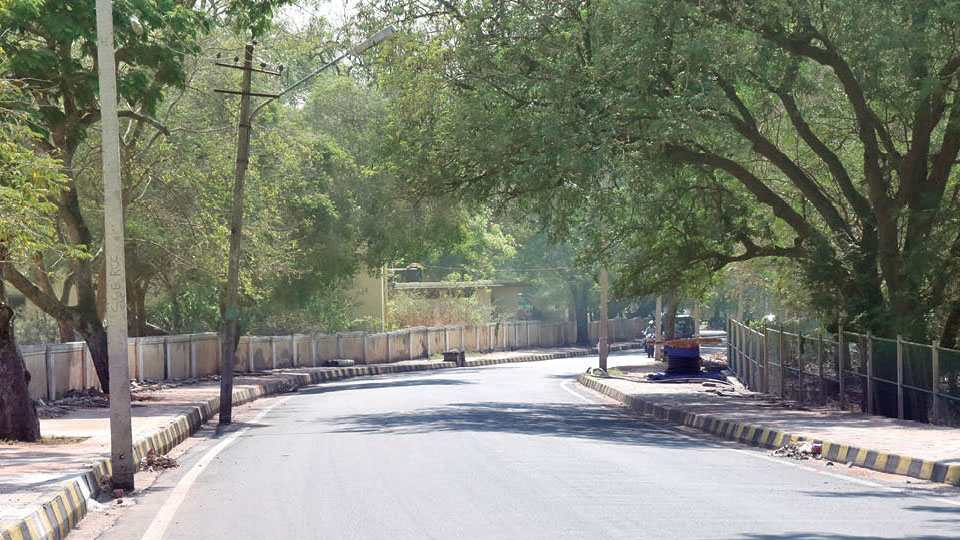 Following the Government order to shut down malls, theatres, schools and colleges for a week amidst Novel Coronavirus (COVID-19) scare, Mysuru closed down partially on the first day yesterday. Here are the glimpses of the city through the eyes of our cameraman.

Students staying at various hostels run by the Government, private institutions and charity organisations leave their hostels as they have been directed by the hostel managements to vacate the rooms.

There are over 150 student hostels run by Backward Classes and Minority Department, Social Welfare Department, University of Mysore, charity organisations and religious mutts. Only those students who have SSLC and PUC exams have been asked to stay. Strict instructions have been passed on to students who are staying at hostels to maintain personal hygiene.

Time to relax, under shade

Tiny tots sit under a tree of a school in city. Many private schools refused to close down despite the Government order and conducted classes yesterday. Now the DDPI has issued a warning that action will be taken against schools if they do not comply with the Government order.

A coolant in the absence of cinemas

A tender coconut vendor digs deep into his pocket to fetch change to give it to customers. With no malls, theatres and pubs, people took time to sip nutritious tender coconut. The vendor’s cart near the BM Habitat Mall saw more than usual crowd yesterday.

Many summer camps that have been organised in city has been closed following the Government order. Photo shows a family returning home from the closed gates of a summer camp organised at the Scouts and Guides Grounds.

The usually busy road near the Mysuru Deputy Commissioner’s Office sports a deserted look last morning as people preferred to stay indoors. Yesterday was a government holiday on account of second Saturday and also, the State Government had ordered certain public places to close.

Perishable items like milk, curds, fruits and vegetables are placed outside a supermarket inside BM Habitat Mall at Jayalakshmipuram after the Government asked all malls to be closed. People thronged the place to buy their requirements as the doors of the supermarket remained locked. Even exotic vegetables and fruits that used to cost a bomb on any other day were sold at throwaway prices.