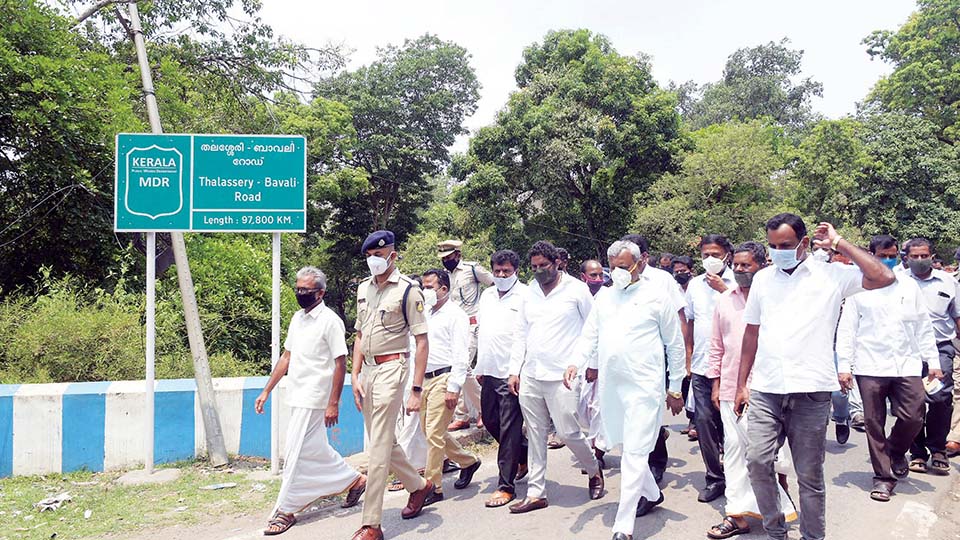 Mysore/Mysuru: With Mysuru witnessing an alarming surge in the number of COVID-19 positive cases, District Minister S.T. Somashekar visited Bavali check-post on Karnataka-Kerala border this morning  and reviewed the COVID control measures being taken up.

Earlier this month, the District Administration had made production of RT-PCR negative report mandatory for all travellers from Kerala who were visiting Karnataka and had set up a COVID-19 Inspection Centre and Border Facilitation Centre at Bavali and other check-posts bordering Kerala, which was one among the States that first experienced a sudden spurt of the deadly pandemic.

Speaking after inspecting Bavali check-post, Somashekar said that those travellers who are not in possession of RT-PCR negative report are being sent back to Kerala from the check-post.

Noting that inter-State travel between Kerala and Karnataka has come down sharply following a spurt in COVID-19 positive cases, he said only about 120 – 130 vehicles are passing through this check-post daily and all the travellers are being mandatorily screened for the deadly virus.

Pointing out that the Kerala Government has set up a Sample Collection Centre at the check-post for the benefit of such commuters who have not undergone the test before travel, Somashekar said that such a measure will be taken by the Karnataka Government too.

Referring to the issue of transportation of goods between the two States, the Minister said that Kerala is getting most of its vegetable supplies from Karnataka through Bavali check-post and the Karnataka Government will ensure that farmers of our State do not face any problems or hurdles in transportation of their horticultural produce. He further said that emergency travel will be allowed through the check-post.

Highlighting the measures taken by the Karnataka Government, Somashekar said he hoped that the people of Mysuru will co-operate in following COVID-19 appropriate behaviour. Mysuru has a considerably lesser number of COVID-19 guidelines violation cases, he added.

Maintaining that the District Administration has set a target of vaccinating 8.75 lakh people, he said that 5.70 lakh eligible people have been vaccinated so far.

Contending that the Chief Minister has formulated tough rules to control the spread of the pandemic by taking everyone into confidence, he said that Mysuru District Administration was committed for total implementation of the new set guidelines. H.D. Kote MLA Anil Chikkamadu, Mysuru SP C.B. Ryshyanth, Tahsildar Nargund, Taluk Health Officer Dr.Ravikumar and other officials were present during the Minister’s visit.