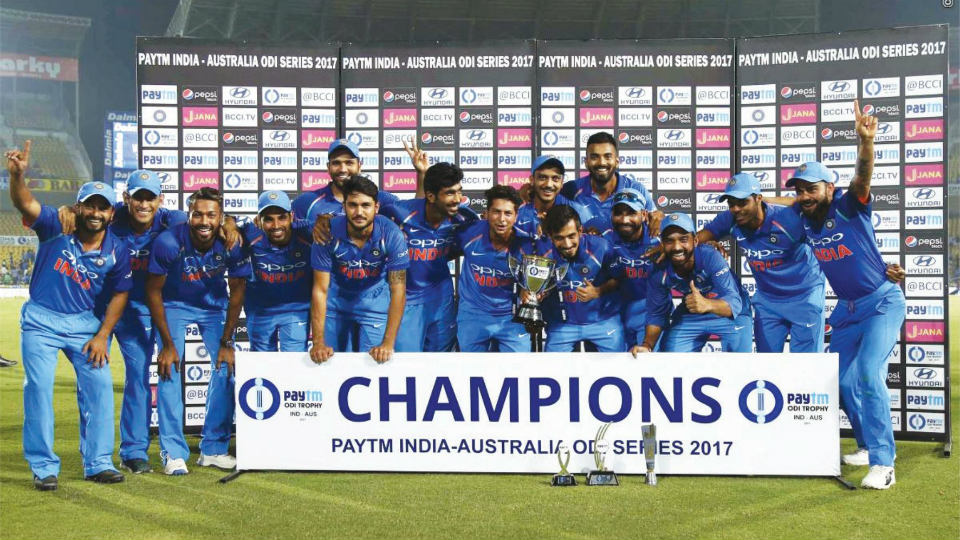 Cricket Talk: Congrats, ‘Men in Blue’ on your ascent to ‘Numero Uno’ ranking

Aussies were outclassed by our boys in all the departments of the game in the recently concluded ODI series. Mitchell Starc, Josh Hazlewood, Jadeja and Ashwin would have added more sheen to the series. Whereas Chahal and Kuldeep grabbed the opportunity with both the hands, none of the bowlers amongst the OZs was impressive. Pacers lacked penetration. Adam Zampa looked ordinary. It was an excellent opportunity for Ravi Shastri and Virat to aim for not only the historical ’10 straight wins’ but also a ‘whitewash’ the OZ.

They squandered the opportunity with too many changes in the Bengaluru encounter. I wonder if we will witness another chance soon in the history of world cricket. If one were to re-script the run-chase at Bengaluru, sans the run-out mess between Virat and Rohit, a 5-0 white wash was still on cards. They should have gone for the proverbial kill. For a ‘Hat Tricker’ to be left out did not justify testing combinations for the 2019 World Cup. ‘Ye Dil Mange More’ never sounds greedy for an achiever.

It was sad that Virat was not amongst runs. But, it was redeeming to watch Rohit, Rahane and Pandya — with contributions from MSD, Kedar and Manish — at crucial moments. Our pacers Bumrah and Bhuvi and the spinners Chahal and Kuldeep excelled in choking the Australian batsmen. Both spinners need to give the ball more air to get better purchase off the pitch. Somehow, Sami is inconsistent and Umesh fails to find rhythm in shorter formats.

Shikar not being available because of his ailing wife gave an opportunity for improved confidence and consistency of Rahane. His four consecutive 50s were all a treat to watch; especially the one at Nagpur. His confidence of being a part of the team brought out the best in him. Rohit was in his elements. The ‘laid-back fella’ is capable of stunning the world with his fluent drives and lofts over the boundary as also the loss of focus and concentration when you need him most. Hardhik has impressed the world with his abilities with the bat, ball and fielding (forget the sitter he dropped at Nagpur). Incidentally, his brother Krunal too has loads of talent and a close competitor to Khedar. Khedar and Maniah looked a bit ‘here and there’ but added value. Sad that Rahul was left out. With due respects to all that MSD has contributed, it is time we brought in Rishab. He has the capacity to be a solid middle order batsman while he can be an under-study to MSD till 2019.

That makes it challenging for every individual to be at his best to stake a claim in the side. Variety that Indian cricket is bringing to the table has been astounding in recent years.

Game of cricket during earlier times was an exclusive privilege of rich and famous in cosmopolitan and metropolitan cities in our country. There was a time when Bombay dominated the scene with sparse presence from other parts of the country. Even Bangalore took time to make impactful entry.

Today, thanks to media and premier leagues, talents from across the country are pouring in. Imagine Gujarat contributing to the national side in a significant manner. Cricket being termed as a religion in India, we have the potential to stage one team from each of the five zones of international competence.

That is what Pandya brothers, Bumrah, Parthiv, Akshar, Rishab, Shreyas, Kedar, Kuldeep, Bhuvaneshwar, Rahul, Nair, Shreyas and the likes have brought to Indian cricket. Good luck to the boys in the ensuing T-20 against the OZs and series against the New Zealanders.