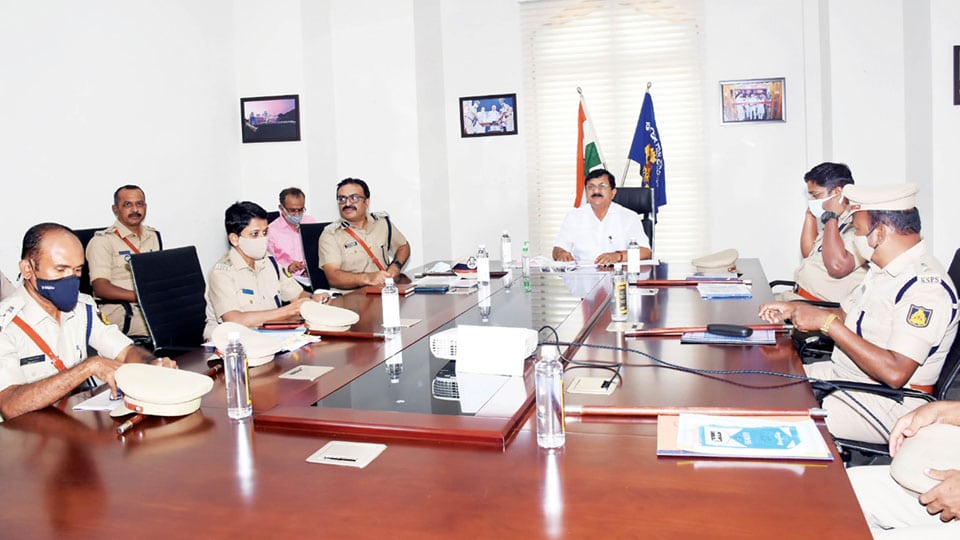 Mysore/Mysuru: Home Minister Araga Jnanendra’s Mysuru visit yesterday came in the wake of the Police facing severe criticism by Opposition party leaders including Siddharamaiah who stated in the Assembly that the Mysuru Police were doing everything except Policing.

Under fire, the Home Minister asked the Police machinery to be alert and be a terror for criminals. Appreciating the teams that strived hard to arrest all the dacoits of the Vidyaranyapuram shootout and dacoity case and also nabbing all those who were involved in the gang rape of an MBA student, the Home Minister asked the Police to ensure that the image of Mysuru is not sullied again.

Apart from Policing, confidence-building measures must be built to instil security in the minds of women and children and the vulnerable population. “Crime detection must be speeded up so that it acts as a deterrent. Messages must be sent out that those who commit a crime will not be spared,”                 he suggested.

Detection of crime and conviction, people-friendly Policing and the safety of women and children must be given priority, he said.

He expressed concern over the rampant abuse of drugs and the Police had booked a total of 61 cases in the last three years arresting 104 people. “Do not show any leniency to persons involved in narcotics, however influential they may be,” Jnanendra told the officers.

Police beat system: At an event to inaugurate a programme to make Vidyaranyapuram Police Station a ‘zero-crime and people-friendly Station’ under the leadership of MLA S.A. Ramdas, the Minister asked the Police top brass to intensify the beat system and noted that the British were successful in controlling India as they had introduced and effectively implemented the beat system.

On the issue of night patrolling, the Home Minister was told that every day, over 250 Police personnel are on the job. He suggested that senior officials also go on night beats to ensure proper and effective patrolling.

He said that the Government is making arrangements for the people to lodge complaints against Police officials for abuse of power. The complaints will be accepted at the SP and DGP Offices, he said. Two telephone numbers will be set up at Offices where complaints would be lodged, he said.