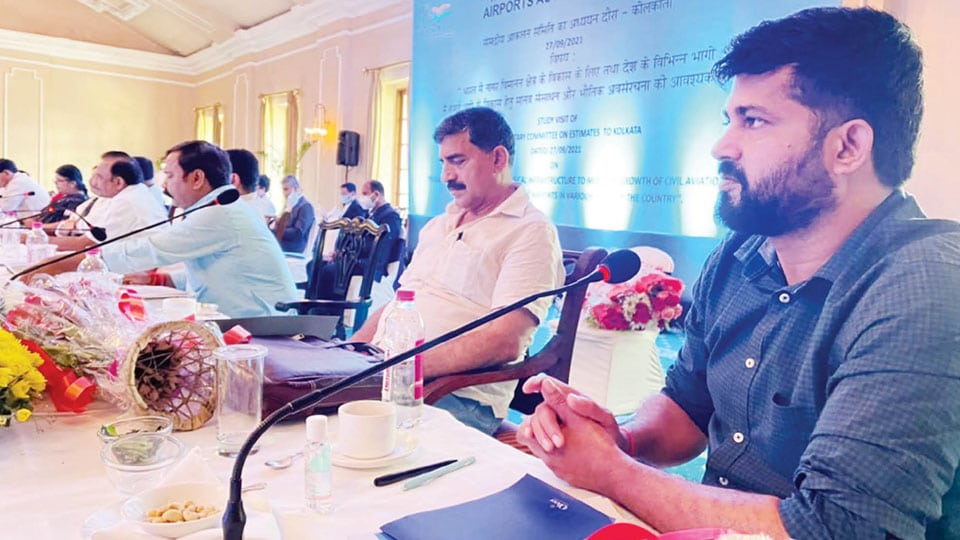 Mysore/Mysuru: The Mysore Airport at Mandakalli will not be handed over to Indian Air Force (IAF) to set up its Helicopter Training Centre and the Airports Authority of India (AAI) has agreed not to do so. This was disclosed by Mysuru-Kodagu MP Pratap Simha who attended the Study Visit of AAI Parliamentary Committee on Estimates in Kolkata on Sept. 27.

Simha is the member of the Committee and during the proceedings, he conveyed to the AAI authorities that the Airport must remain as a civilian airport and should not be handed over to the IAF as it will hinder the development in the region.

Speaking to the media in Bengaluru, MP Pratap Simha said that the Memorandum of Understanding (MoU) signed during the previous Coalition Government headed by H.D. Kumaraswamy with the Ministry of Defence and the AAI stands cancelled.

“I have conveyed to the AAI officials that using Mysore Airport as a military airbase would cripple the region’s future growth. The AAI has agreed to cancel the handover,” he added.

The issue was raised when Hardeep Singh Puri was the Minister of State for Civil Aviation and he had assured not to hand over the Airport to IAF. In his memorandum to Puri, Pratap Simha stated, “If the Airport is taken over and converted to a Helicopter Base, it will bring restrictions in several forms similar to Pune and Bagdogra Airports to ensure National Security by safeguarding Defence equipment that would then be housed at the Airport. This will in turn restrict the airport growth.”

In 2018, Kumaraswamy had urged the Centre to shift the IAF Helicopter Training Centre from Yelahanka in Bengaluru to Mysore Airport. The IAF had conveyed to the then CM Kumaraswamy that it would develop the Mysore Airport on the lines of Airports in Pune, Chandigarh and Srinagar.

In its proposal, the IAF had stated that it will develop the Mysore Airport with its own costs and make available facilities for both civil and military use. This will considerably reduce the pressure on the Kempegowda International Airport in Bengaluru, the IAF had said.  After the then CM’s proposal, the State Government gave its ‘No Objection Certificate’ for the use of Mysore Airport. Since the Airport comes under the jurisdiction of AAI, Kumaraswamy’s request was pending with AAI. Now the proposal has been shelved.

“Since Mysuru is known as the Cultural-Heritage Capital of Karnataka, passengers are attracted by the tourism experience of the city. Additionally, Mysuru is also now attracting industries with the establishment of IT majors and various automotive ventures. And in such a situation, handing over the Airport to IAF will hamper the growth of the city and will affect the tourism potential of the entire region,” the MP reasoned.

2 COMMENTS ON THIS POST To “Mysore Airport to remain as civilian airport: Pratap Simha”