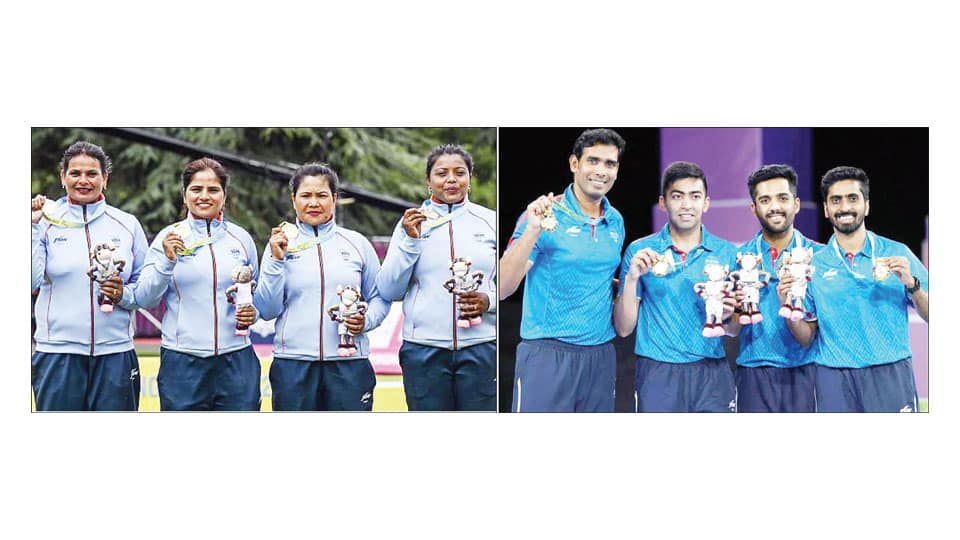 CWG – Day 5: Gold in Lawn Bowls and TT; Silver in Badminton and Weightlifting

India added four more medals to their already existing tally of nine on Day 5 at the ongoing Commonwealth Games in Birmingham.

The spotlight was on the Women’s Fours Lawn Bowls Team as they won a gold. The Indian team defeated South Africa 17-10 in the final, clinching India’s first medal in the sport. The quartet of Lovely Choubey, Rupa Rani Tirkey, Pinki and Nayanmoni Saikia made history as they recovered after trailing in the title to triumph.

The Men’s Table Tennis Team won the second gold medal of the day after beating Singapore 3-1 in the final. The Doubles pair of Sathiyan Gnanasekaran and Harmeet Desai won their match to give India the lead, before Clarence Chew defeated the experienced Sharath Kamal to make it 1-1. But then Sathiyan and Harmeet won their Singles matches to win gold for India.

Weightlifter Vikas Thakur won a silver medal in the Men’s 96kg final with a combined best lift of 346 kg.

Last but not the least, the Badminton Mixed Team also won a silver medal after losing to Malaysia in the final. Kidambi Srikanth lost to lower-ranked Tze Yong Ng in three games to put the defending champions on the backfoot in the final. P.V. Sindhu did what was expected out of her in the Women’s Singles while the Men’s Doubles pairing of Satwik Sairaj Rankireddy and Chirag Shetty went down in the opening Doubles. With the win, Malaysia regained the title they had lost to India four years ago in Gold Coast.