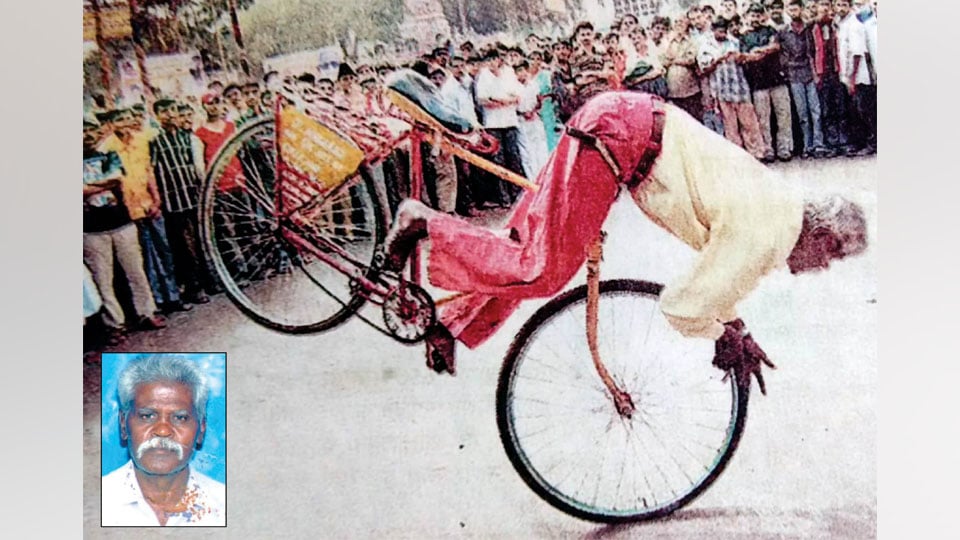 Mysuru: He balanced his entire life riding a bicycle without breaks and performing circus on it and hence came to be popularly known as ‘Cycle Circus’ J. Nagaraju.

‘Cycle Circus’ Nagaraju, a resident of Kesare, Belavatha, who lived up to the ripe old age of 88, passed away on July 13 at a private hospital following age- related illness. He leaves behind his wife Mahadevamma, two daughters and a host of relatives, friends and admirers.

Nagaraju used to perform in the world famous Dasara celebrations and other Government functions and through his cycle stunts attracted huge crowds. He was also most sought after in Schools and Colleges to perform the acrobatics that he was so well-known for. His only regret was that his talent never got the recognition that was due to him either from the Government or any cultural organisation.

“My father was deeply hurt with this step-motherly treatment and hence he never applied for any Government pension or other facilities he so richly deserved. He had won several awards and was also featured in many articles,” said his daughter Kavitha speaking to Star of Mysore.

Cycle Circus J. Nagaraju
70 groups come together to preserve green cover in Kodagu
I did not have biriyani with IMA fraudster: CM