Home » Sports » Cycling around the country for peace and harmony 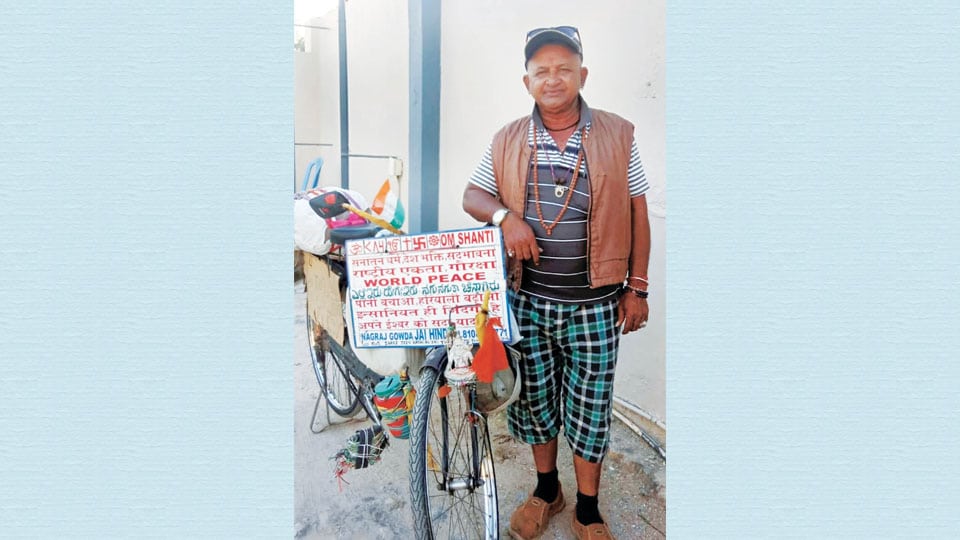 Cycling around the country for peace and harmony

This young man is on a mission — to spread the message of peace and harmony all over the country. His mode of transport? A bicycle!

Nagaraja Gowda, a native of Hassan, is the man on a mission who has started his journey on a bicycle from Mumbai in 2017 and his journey is still going on.

Earlier, Nagaraja Gowda was working as an actor, used to do some small roles, in Bollywood. On Dec. 3, 2017, he says he decided to travel around the country and spread the message of communal harmony, nature and water conservation, world peace and other such important causes.

As Star of Mysore spoke to Nagaraja Gowda, who arrived in Mysuru as part of his tour on bicycle, he said, “Every day, I travel around 80 to 100 km from 8 am to 6.30 pm. During nights, I take shelter at a Temple or Ashram. I have met a number of notable personalities during my travel including CM Kejriwal in Delhi, former CM Akhilesh Yadav in Uttar Pradesh, Madhya Pradesh CM Kamalnath Singh, Gandhian S.N. Subbarao who have all encouraged me to purse this enchanting journey.”

“So far, I have travelled 12 States and Karnataka is the 13th State. Recently, I met Sri Ganapathy Sachchidananda Swamiji of Avadhoota Datta Peetham and took blessings. As I know Kannada, Telugu, Tamil, Hindi and English languages, I can communicate with people and share my experiences with them. Maharashtra is my next destiny,” he said.