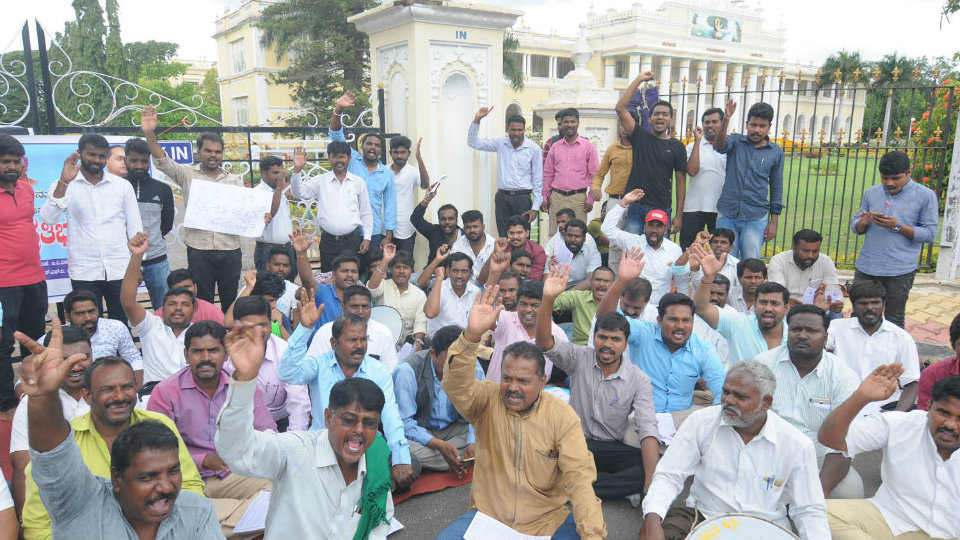 Mysuru:  Accusing the authorities of failing to act on the Governor’s directive to initiate criminal proceedings against University of Mysore (UoM) former Vice-Chancellor Prof. K.S. Rangappa, UoM Registrar Prof. R. Rajanna and Deputy Registrar Vishakanta in connection with the alleged irregularities in the appointment of 124 non-teaching faculty, over a hundred members of Dalit     Sangharsha Samiti (DSS), Dalit Vidyarthi Okkoota, UoM Research Students Association and a host of other organisations, launched an indefinite stir in front of Crawford Hall here this morning.

Maintaining that despite the Governor’s directive, no action has been taken against the trio, the protestors demanded immediate measures for initiating criminal action against them.

Alleging that the University authorities had filed false cases against a few dalit students and scholars for protesting against UoM irregularities at Manasagangothri about a fortnight ago, the protestors demanded withdrawal of all cases. They also sought better civic amenities and infrastructure at UoM Hostels, continuance of the service of Guest Lecturers who had served in the previous academic years, among others.  Former Mayor Purushotham, DSS leader Choranahalli Shivanna and Dr. Krishnamurthy Chamaram led the stir.