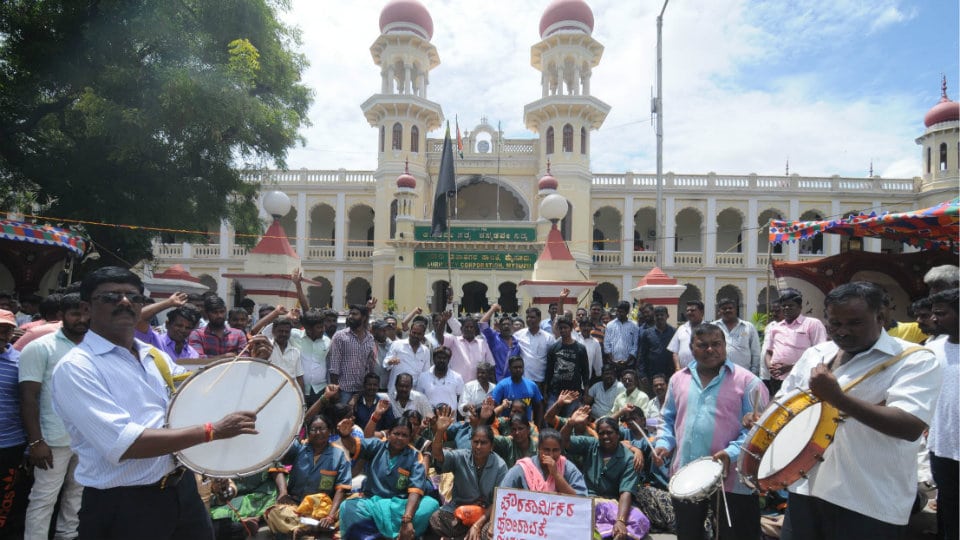 Mysuru:  The indefinite stir launched by Pourakarmikas in front of the MCC Office on Sayyaji Rao Road, seeking fulfilment of their demands, entered the second day today.

They are demanding regularisation of services, abolition of contract system of employment, payment of bonus on Ambedkar Jayanti Day as in the case of BBMP and 30-day wages in a year for working on holidays, among others.

The Commissioner said that Chief Minister H.D. Kumaraswamy was apprised of their demands when the officials had gone to extend an official invitation to Dasara yesterday.

The CM is said to have given an assurance on considering their demands seriously. But the assurances given by the Government on previous occasions are yet to be fulfilled and as such there was no question of withdrawing the stir until their just demands are met, he said.

Even as they continued with their stir, the State Government is said to have decided on providing lunch to Pourakarmikas from Indira Canteens on a  daily basis as being done in BBMP, which will benefit over 2,400 Pourakarmikas serving in the MCC, it is learnt.