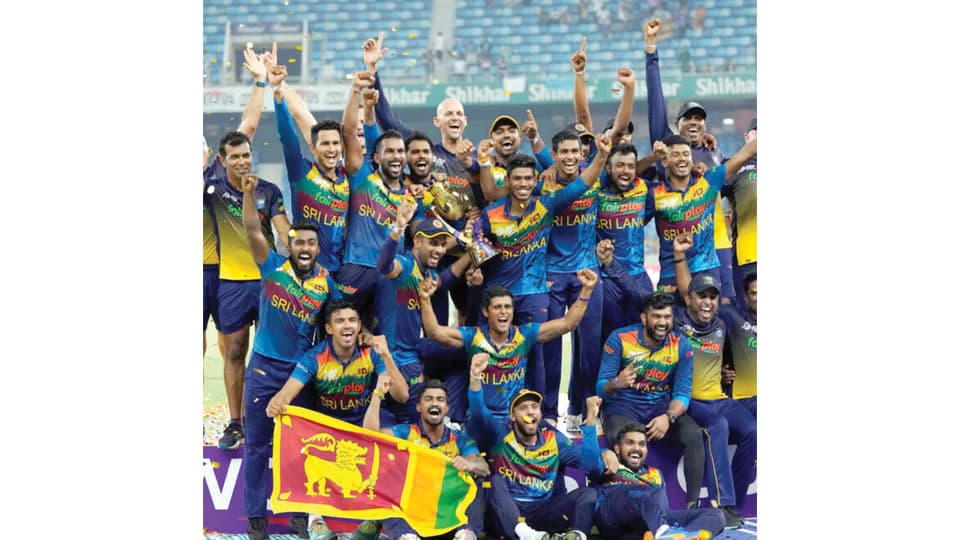 Ring of Fire’ at the Dubai International Cricket Stadium was lit up in ‘Sprawling Fire Crackers Show’ as proud Lankans exhibited spirited display of cricket to lift the Asia Cup-2022; their 6th Cup, after a gap of 7 long years.

Undoubtedly, Pakistan’s ‘Bench Strength’ was far superior to that of the Lankans. On the day, the Lions roared while the Pakistanis were all in disarray. Put into bat, Lankans collapsed to 58 for 5 in the 9th over; as we all suspected a ‘Damp Squib’ to ensue. But a dogged partnership of 58 runs between Rajapaksa-Hasaranga helped Lankans to build a decent total of 170. What followed later were more characteristic — their exceptional bowling and brilliant catching.

“Catches Win Matches,” an old cricketing adage was writ all over; as the Lankans latched on to every difficult chance to leave Pakistan ‘Shell Shocked’ falling short by 23 runs. That was their 5th successive/straight win in the tournament. Heartiest congratulations to them on lifting the coveted trophy. And, hearty congratulations to the spin wizard and impactful batsman Wanindu Hasaranga on being adjudged the ‘Player of the Series’. Bravo Lions.

It was pleasing to hear Lankan Skipper, Dasun Shanaka, dedicating the Trophy to his ailing Motherland. World felt sad when Sri Lanka Cricket appealed to the Asian Cricket Board to shift the tournament out. Consequently, it was only on the 2nd of August, 2022, the fixtures were announced at the UAE — and the Emirates provided excellent facilities at short notice. We thank UAE for their grand gesture. And, we all pray that Sri Lanka comes out of the crisis soon and peace restored in the Island at the earliest.

Cricket is a funny game. Complexion of tournaments can change metamorphically, especially in T20 format.  Here, the Lankans were nowhere in the reckoning at the beginning of the tournament. The suspicion grew more when they lost miserably to Afghanistan in ‘Round Robin’ by 8 wickets and 59 balls to spare — a pathetic display.

Their self-belief grew soon, in a heroic chase of 183 against Bangladesh in the 20th over. Carrying the momentum into the ‘Super Four’ round, they displayed splendid grit and determination chasing 175 against Afghanistan and leaving India ‘Yellow Faced’ chasing 173 with ease.

Commentators and Pundits lamented thus: Focus was all on India and Pakistan vying for the Cup. Whereas India disappointed with wayward performances, Pakistan failed to gel as a unit; vastly on account of Skipper Babar Azam not clicking with his willow.

Undoubtedly, keeper Md. Rizwan batted consistently and brilliantly. Hardly the others rallied around him to create a distinct impact. But, their bowlers were the best and most consistent of all other teams. Their ground fielding and catching left much to be desired. Anyway, that is cricket.

Coming to the format of the Asia Cup-2022. A tournament of any kind cannot contain innocuous and inconsequential matches in the format. Every possibility has to be envisioned to ensure continuity of cricketing interests — both for the players and the spectators/ TV viewers all over. Groups leading to Knock Outs should have had continuity to finals — without compulsions of playing innocuous/inconsequential matches. I refer to the two such boring and meaningless matches in the ‘Super 4’ — First ‘India Vs Afghanistan’ and Second ‘Pakistan Vs Sri Lanka’, a flawed format. Instead of Groups A & B, all the teams could have played Round Robin; Plus 2 Semis and Final would have ensured clinical closure. Well, maximisation of encounters through thoughtless formatting lead to ‘Boring Encounters’.

Lastly, a few thoughts on our own boys. Excitement was rife with huge expectations. It was almost a forgone conclusion that Men in Blue and Men in Green were the hot favourites. Ironically, we lacked the ‘Cutting Edge’ as openers faltered time and again. Middle order failed to butt in.

Rohit was here and there. No one can understand the mindset of K.L. Rahul. His average of 17.5 until we were edged out of the Asia Cup is awful for an opening batsman. KLR rose from the ashes, only after we were reduced to ashes; to belt 62 off 41 against Afghanistan; an inconsequential match. Surya Kumar Yadav and Hardik Pandya seem to be getting complacent. Pant was indifferent while Dinesh Karthik was wondering of his unceremonious exclusion. Only redeeming feature, however, was the return to form of Virat Kohli. Bowlers lacked the ‘Killer Instinct’. Ashwin seems to be getting ready for his exit from international scene. Fielding and catching were below par. Best to the boys going forward.

In the tournament, Afghans have looked an excellent side. On their day, they are capable of choking any team in the world. We wish them the best.