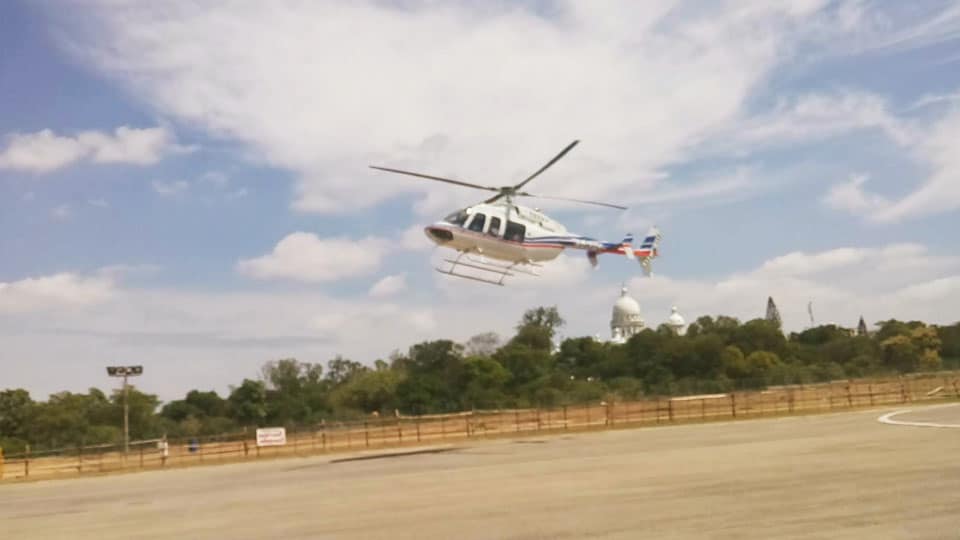 This Dasara you can enjoy helicopter ride from Sept. 15 to Oct. 2

Mysuru: This year too, tourists and residents can hop into choppers to get a bird’s eye view of all the iconic places in Mysuru including the famous Mysore Palace and the Chamundi Hill. The helicopter rides will begin from Sept. 15 to Oct. 2 and it will cost Rs. 2,300 per person.

Last Dasara, the district administration introduced a programme called ‘Agasadhinda Mysuru’ which gave tourists and residents an opportunity to tour Mysuru in a helicopter. The ride started from the Lalitha Mahal Helipad and covered the whole city in 10 to 15 minutes. Six people (excluding the pilot) could sit at a time in the chopper.

This year, the authorities have plans to introduce two helicopters and have approached two private aviation companies. Private operators will take the total responsibility of rides and the District Administration will make all the necessary arrangements.
Sources from the District Administration said that the chopper ride is being offered at a reduced fare during Dasara to promote tourism. The rides are being organised similar to those offered during Hampi Utsav.

This Dasara, flights will begin from 10 am and companies including Pavan Hans and Chipsan Aviation have come forward to operate choppers and people on board can view the city from a height of over 20,000 ft. Fliers can purchase tickets for the chopper rides from the Lalitha Mahal Helipad.

There will be special stress on safety and only expert pilots have been roped in to fly helicopters. The flying machines will be checked after each flight and an exclusive technical team will monitor the operations, sources said.

It may be mentioned that aerial joyrides involving Cessna flights were introduced for the first time in 2012, and they were a great hit with Mysureans. The flights then were operated from Mysore Airport at Mandakalli.

4 COMMENTS ON THIS POST To “This Dasara you can enjoy helicopter ride from Sept. 15 to Oct. 2”