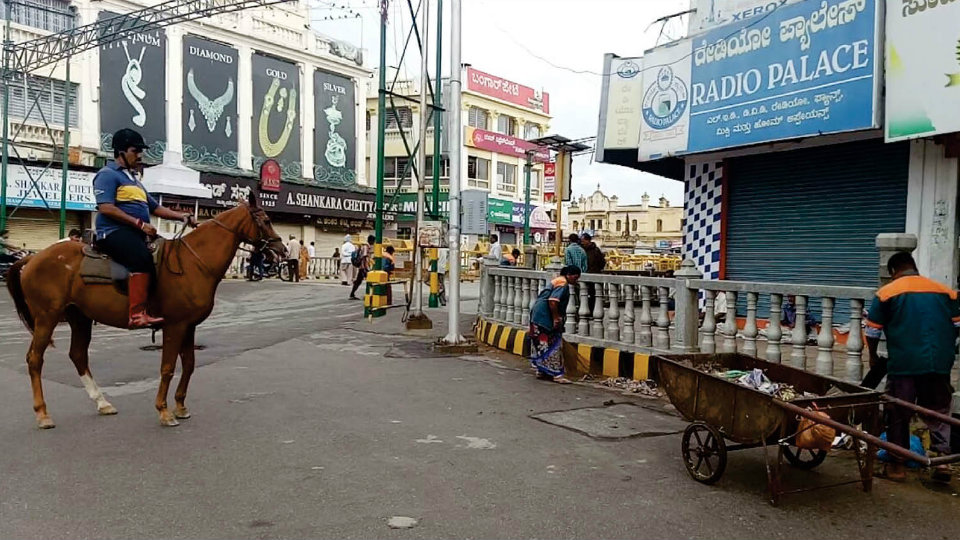 Mysuru: All out efforts are being made to see that the city regains its top spot as the cleanest one in the country. With Dasara fast approaching, the first Citizen, the Mayor M.J. Ravikumar himself has taken keen interest to see that at least the Central Business District is kept clean.

To ensure the cleanliness,  Ravikumar went around the city this morning on horseback to inspect the cleanliness operation undertaken by the Mysuru City Corporation (MCC). As per the tradition, the Mayor of city goes on horseback during Jumboo Savari on Vijayadashami Day. Probably Ravikumar inspecting city on horseback was also a practice to enable him go effortlessly on the procession day.

To enhance the beauty of the city for Dasara, a few walls are painted with heritage structures. However, a painting of the Mayor on horseback on a wall has invited severe criticism from the public who claim that such pictures were only confined to Maharajas who ruled the city.

The public contend that pictures of ZP President and others who go on horseback during Dasara procession should also appear. They seek intervention by District Administration and MCC Commissioner in this context.

However, if the Central Business District, where the iconic Mysore Palace is located, itself spews garbage and plastic right outside its precincts then the wait will sure get longer. Whether this has come to the notice of the Mayor is still uncertain.

This is exactly the scene at the Palace premises on the left side of the Amba Vilas gate where the Palace Board has given permission to set up shops to sell ice creams and soft drinks. Every day thousands of tourists visit the Palace. Earlier, too, the Palace Board had the shops inside the premises vacated. Added to this, signboards have also been put up claiming that it is a plastic-free zone.

However, in spite of all the efforts, when the visitors buy ice creams, water bottles and other eatables, they just dispose them off carelessly on the pavements. As a result, the Palace premises are looking very unclean.

Added to this, the quality of ice creams sold is of questionable quality and they are being sold at a higher price than the marked one.  The Palace security has been handed over to private agency. In spite of this, the area is covered with plastic. However, when asked about this problem, the security personnel expressing their helplessness said that they could stop the sales people who come from outside from harassing the visitors. But, when the Palace Board itself has given permission to set up shops, then they cannot do much about it.

Will the authorities wake up to see that the surroundings of the world famous Palace are kept clean? Otherwise, to regain the tag, which we claimed with pride twice, will remain a distant dream.