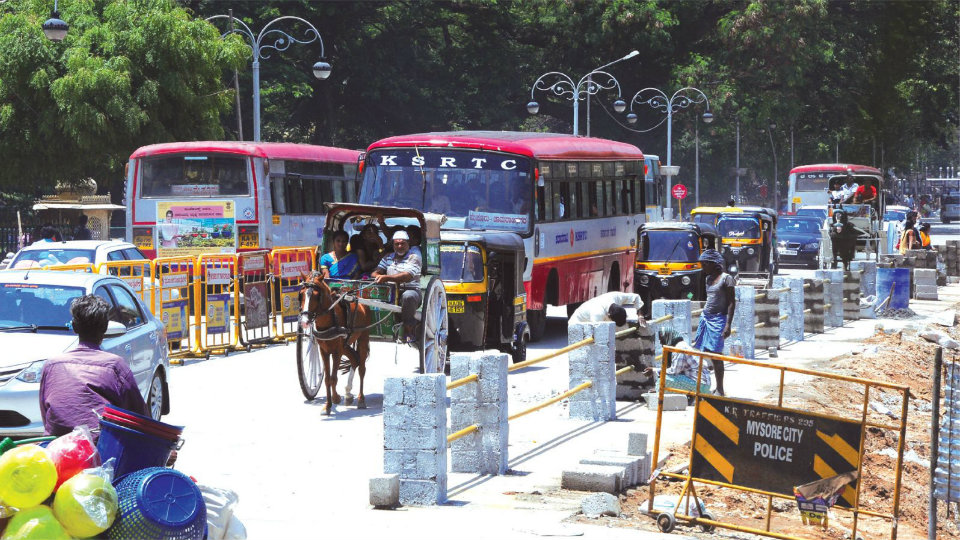 Mysuru: The Dasara Exhibition Road from Jayachamarajendra Circle (Hardinge Circle) to Gun House junction, which was closed for traffic for about three months, following the concrete works of the road taken up by the Public Works Department (PWD), was opened for traffic on Sunday morning, thus easing the traffic density in the heart of the city and on Mahatma Gandhi (MG) Road, which bore the brunt of heavy traffic.

Following the closure of the Dasara Expo stretch and tourists pouring into city since Friday night as it was a long-weekend from Apr. 29 to May 1, the M.G. Road faced serious traffic problems.

Added to this, asphalting on one part of the MG Road was taken up by the MCC resulting in swelling of traffic density on the other part of M.G. Road. KSRTC buses, including other vehicles proceeding towards and coming from T. Narasipur and Bannur sides, began to ply on this route.

The MCC which had taken up the M.G. Road developmental works under the Rs. 100 Crore CM’s Special Grant, did not wait till the concrete works of the stretch of road from Gun House to Jayachamarajendra Circle (JC Circle) was completed.

The traffic density on the already burdened M.G. Road witnessed heavy traffic between 5 am and 10 am as lots of vehicles carrying vegetables and others goods enter the market. Also, the public visiting the M.G. Road market, parked their vehicles haphazardly on either side of the road, thus hindering smooth vehicular movement. Besides, the menace of stray cattle persists on this stretch of road.

Meanwhile, the stretch of the road from Gun House Circle to JC Circle, which was thrown open for vehicular movement on Sunday, gave relief to the Traffic Police, tourists and regular commuters of this particular stretch of road, as the Traffic Cops had a tough time maintaining the heavy traffic density on various roads in city.

The nearing 1-km stretch, which was taken up by the PWD for laying a concrete top, also has a median from Gun House Circle till the entrance of Dasara Expo Grounds. Though the stretch has been re-opened,  work on erection of barricades and laying of foothpath and interlocking tiles along the edges of   the road is pending.

Meanwhile, PWD Executive Engineer Ravikumar, speaking to SOM this morning, said that there would be a median dividing the road from Gun House Circle to JC Circle and added that median has been constructed from Gun House Circle till the Dasara Expo Ground and as there are some problems pertaining to Doddakere Maidan, the remaining median works would be taken up only after the issue is solved.

Right time to open subway for pedestrians: With this stretch of road thrown open for traffic, it is right time for the authorities to open the subway near the Mysore Palace and Dasara Exhibition Ground for pedestrians, who are found crossing the ever-busy stretch as the subway has remained closed since it was inaugurated. Also, the Traffic Police should ensure that pedestrians take the subway to reach the other side and prevent them from crossing on the busy road.

Stretch has become narrow: Meanwhile, auto drivers at the Pre-Paid Autorickshaw Stand near JC Circle opined that the stretch, after completion of concrete works, looked narrow which may lead to traffic related problems in future.

Even the footpath near Doddakere Maidan has become narrow, forcing the pedestrians to walk on this busy stretch.