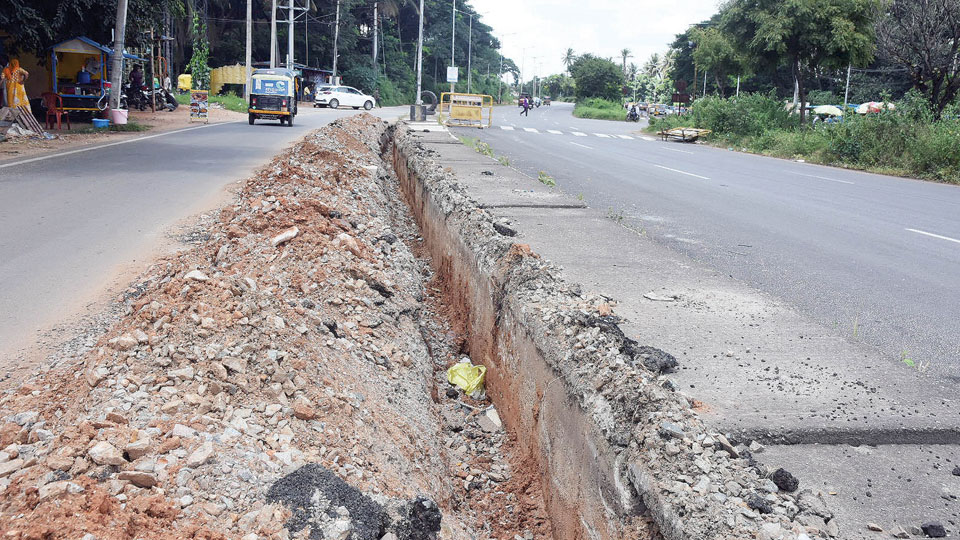 Dasara is here so are works on dark Ring Road stretch

Work begins for underground cabling; tender for lights, switches yet to be called

Mysore/Mysuru: Dasara festival is here and as in the past, the buzz around a dark and dangerous Ring Road can be heard again loud and clear. The Mysuru City Corporation (MCC) wants to illuminate the 42.5-km stretch for ‘tourist and passenger convenience.’ Years after shifting blames and passing the buck between the MCC, Mysuru Urban Development Authority (MUDA) and the National Highways Authority of India (NHAI), the ball is now in the MCC and MUDA’s courts. While the MUDA will fund the electrification, the MCC will maintain it and pay the electricity bill.

The work order to lay underground cables was issued yesterday and the works have begun this morning. Cabling tender is worth Rs. 4.64 crore and the tender has been handed over to Bengaluru-based Geetha Electricals.

Cabling works have begun from Manipal Hospital Junction on Bengaluru-Mysuru Highway and the workers are laying cables towards the Hanchya-Sathagalli side.

Insulated wires will have to be laid as the existing wires have been eaten by rodents in the 42.5-km long six-lane Ring Road. These wires were laid by MUDA way back in 2014 before the road was handed over to the NHAI. Once the rodent bite-proof wires have been laid, the supply will be restored and the cables will take power to the overhead bulbs.

There are over 2,135 electric poles along the road and 4,818 LED bulbs have to be fixed. As part of the project, the many fallen streetlights too have to be restored. The LED lighting will be implemented with a Centralised Control and Monitoring System (CCMS) with smart meters and Internet of Things  (IoT) controllers.

This enables the integration of all LED lamps and they can be operated remotely through wireless communication.

Under the project, apart from 4,818 LED bulbs, 70 CCMS points will be set up along the Ring Road and to cover dark spots, 98 octagonal poles will be erected. “Separate tenders will be called to replace the defunct bulbs in the coming days and the pitch-dark stretch will see lights only after Dasara.

As per the plans, the MCC and MUDA have come to an understanding that the MUDA will pay the MCC Rs. 12 crore to replace the bulbs, rodent-eaten wires and other cabling works. After the lights are restored, the MCC will maintain the light poles and also pay the electricity bills. The MUDA has already readied a cheque of Rs. 6 crore.