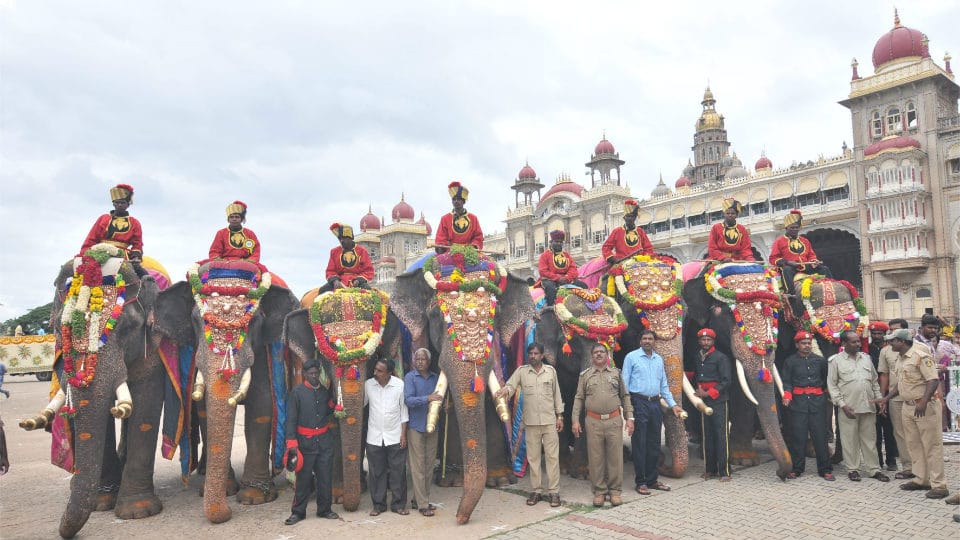 Mysuru: The first batch of eight Dasara elephants were accorded a warm welcome at the iconic Mysore Palace this noon. A shower of flower petals from the balconies of the Palace, traditional music, Police Band performance and a large number of tourists marked the occasion.

The eight elephants that were stationed at Aloka Palace were brought to Aranya Bhavan, the Forest Department office at Ashokapuram in eight trucks. From there, the elephants began their walk to the Palace. The elephants are Arjuna, Abhimanyu, Balarama, Bheema, Gajendra, Vijaya, Kaveri and Varalakshmi.

At around 7.30 am, the elephants were made to climb the customised trucks at Aloka Palace after a traditional puja and they arrived at Aranya Bhavan at around 9 am.

From there, they walked towards the city and reached the Jayamarthanda Gate at around 11.15 am.

The elephants walked through Chamaraja Double Road, Ramaswamy Circle, Ballal Circle, Gun House Circle to reach the Jayamarthanda Gate where they were traditionally welcomed. As the elephants walked, a tank load of water was poured on the road to cool the road and to prevent stones and iron nails from pricking the legs of the elephants. 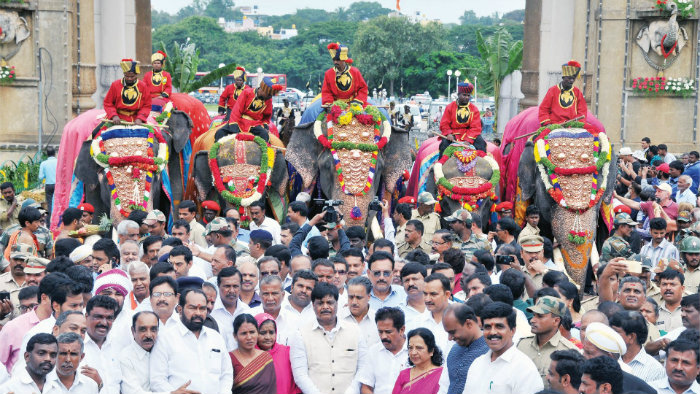 District in-charge Minister Dr. H.C. Mahadevappa is seen welcoming the Dasara elephants along with other VIPs.

The procession, accompanied by cultural troops, entered the Jayamarthanda Gate at 12.20 pm in the auspicious Abhijin lagna and Sakalashodashopachara puja was performed along with Ganapathy Mantra and Pada Puja.  The puja rituals at the Palace and at Aloka Palace were performed by palace priest S.V. Prahallada Rao who has been performing similar pujas since the last 21 years.

For the first time, the Police Band performed inside the Palace to welcome the elephants and saluted the elephant team. As the elephants walked from Ashokpuram to the Mysore Palace, people on the roads greeted them and many of them were seen taking selfies with the elephants. Some people were seen witnessing the procession by climbing atop the high-rise buildings.