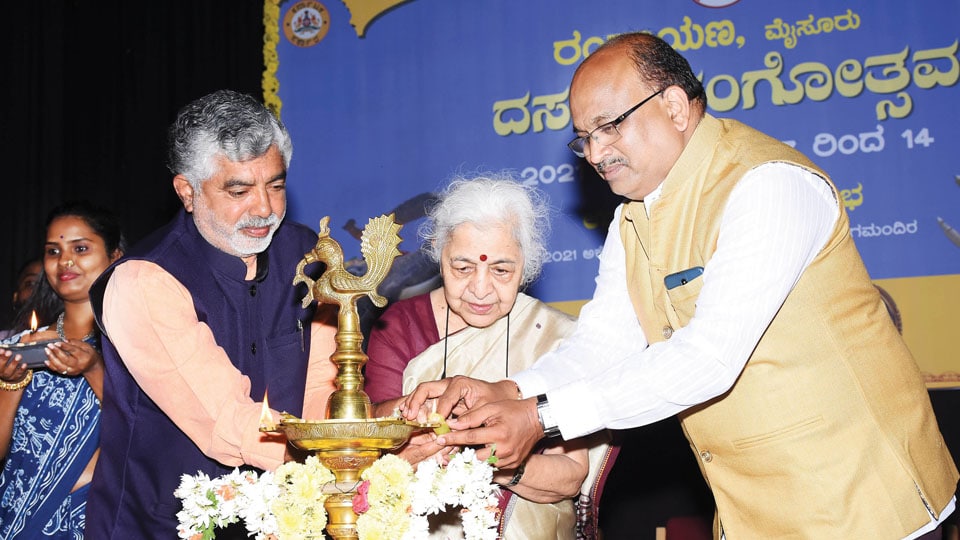 She was speaking after inaugurating 8-day Dasara Rangotsava organised by Rangayana  at B.V. Karanth Ranga Chavadi in Rangayana premises yesterday.

Pointing out that thousands of artistes have emerged from State repertories such as  Neenasam, Sanehalli, Rangayana and National School of Drama over the years,  Rajeshwari  Verma said that many artistes are facing a lot of hardships due to want of job.

Stressing on the need for the Government to set up Resource Centres at all Districts for coming to the help of artistes, she observed that the theatre, apart from displaying total commitment to art, also teaches one to have social concerns.

Noting that mental capability of children will improve a lot  by engaging them in theatrical  and other art activities, she wanted the Government to appoint Arts and Drama teachers in Schools.

Mysuru Rangayana Director Addanda C. Cariappa said that the Government used to give Rs.10 lakh as grant during Dasara for organising the theatre festival at Rangayana. But due to the COVID pandemic, the theatre festival could not be organised last year. However, this year, the festival has been organised even though the Government grant is yet to be released, he said and expressed the hope that the 8-day event will be a grand success.

Rameshwari Verma was honoured with ‘Dasara Ranga Gourava’ award on the occasion.

On the first day yesterday, artistes from Shivamogga Rangayana enacted  ‘Hathyakanda’ (Vidhurashwatha Veeragathe focussing on the 1938 freedom movement) play, with Krishnamurthy Kavattar as the Director.

The fest, which features five plays to be enacted by Shivamogga and Mysuru Rangayana artistes, will conclude on Oct.14.

Shivamogga Rangayana Director Sandesh Javali and others were present.