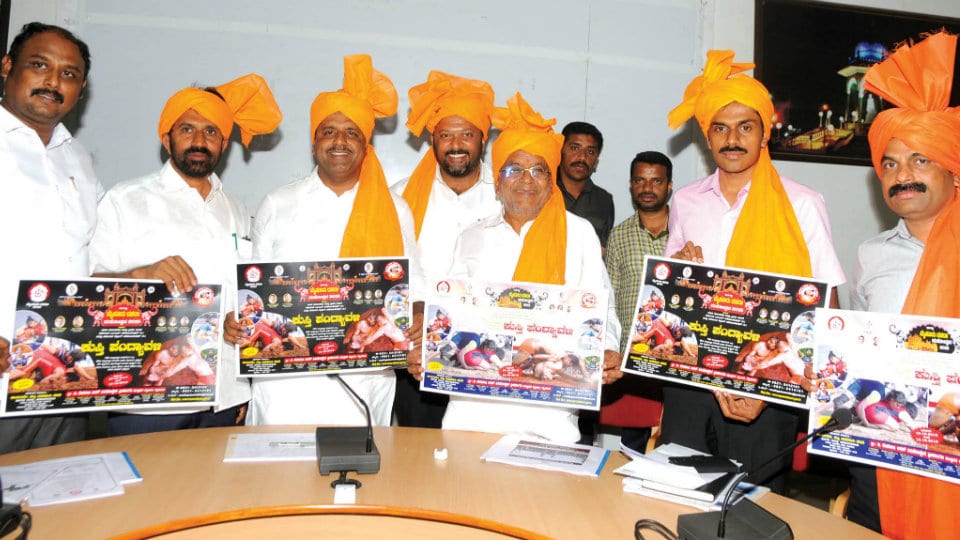 Event to be held from Oct.10 to 15 at Exhibition Ground

Mysuru: District Minister G.T. Devegowda released the posters of Dasara Wrestling Contest at a simple function organised by the Dasara Wrestling Sub-Committee at the Deputy Commissioner’s office in city yesterday.

The event will be held from Oct.10 to 15 for both men and women at D. Devaraja Urs Multi-purpose Stadium, Dasara Exhibition Ground in city.

The contest is organised jointly by the District Administration, Department of Youth Empowerment and Sports (DYES), Karnataka Olympic Association (KOA) and Karnataka Wrestling Association as part of Dasara celebrations.

Wrestlers will be honoured with Dasara Kanteerava, Dasara Kesari, Dasara Kishori and Dasara Kumari awards on   the occasion.

INAUGURATION: The tournament will be inaugurated on Oct.10 at 3.30 pm by Chief Minister H.D. Kumaraswamy.

The weight measurement of the wrestlers will be taken at 8 am daily. The point-level wrestling tournament will held from 8 am onwards, while Naada Kusthi competition will held from 3.30 pm onwards.

Prize distribution: A cash prize of Rs.12,000, Rs.6,000 and Rs.1,500 will be given for the first, second and third prize winners of State-level freestyle wrestling, Greco-Roman style for men and freestyle wrestling for women competitions.

While Rs.6,000, Rs.3,000 and Rs.1,500 will be given for the first three winners of Mysuru Division-level Freestyle Wrestling competition.