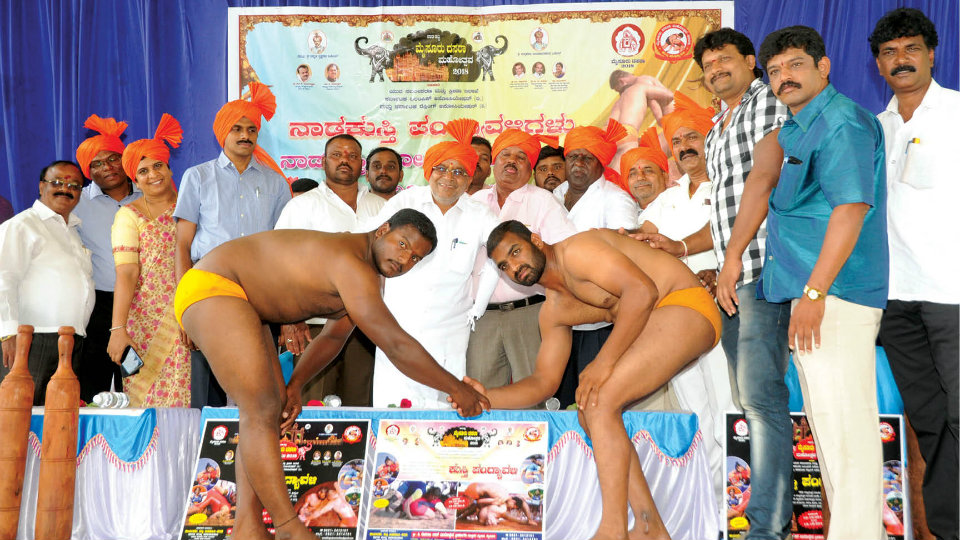 Mysuru:  Over 150 wrestlers from various parts of districts of Mysuru, Mandya, Hassan and other districts of Karnataka took part in the Naada Kusthi Dasara Wrestling Conditioning Drill – Pairing of Wrestlers (Jodi Kattuva Karya) that began at B.V. Karanth Rangamandira located at Dasara Exhibition Grounds in city   this morning.

The event is a prelude to the Dasara Wrestling Contest to be held from Oct.10 to 15.

During the conditioning drill, the wrestlers will be trained to improve the strength, quickness, agility, endurance, balance and mental toughness.

Inauguration: Speaking after inaugurating the conditioning drill by shaking the hands and patting the back of the wrestlers at  B.V. Karanth Rangamandira, District Minister G.T. Devegowda said Karnataka has the highest number of wrestlers after Uttar Pradesh in the country.

He stressed the need for promotion of wrestling, kho-kho, kabaddi and other desi games.

He also expressed pleasure about participation of women in wrestling competition in recent years which is a healthy sign of development.

Remembering the contributions of erstwhile Maharajas of Mysuru for promotion of Naada Kusthi, he said Pailwan Basavaiah of K.G. Koppal and others popularised wrestling in Mysuru. City has highest number of Garadi Mane, he added. The Minister advised the youths, especially students, to practise wrestling for good health as they practise yoga and other fitness exercises.