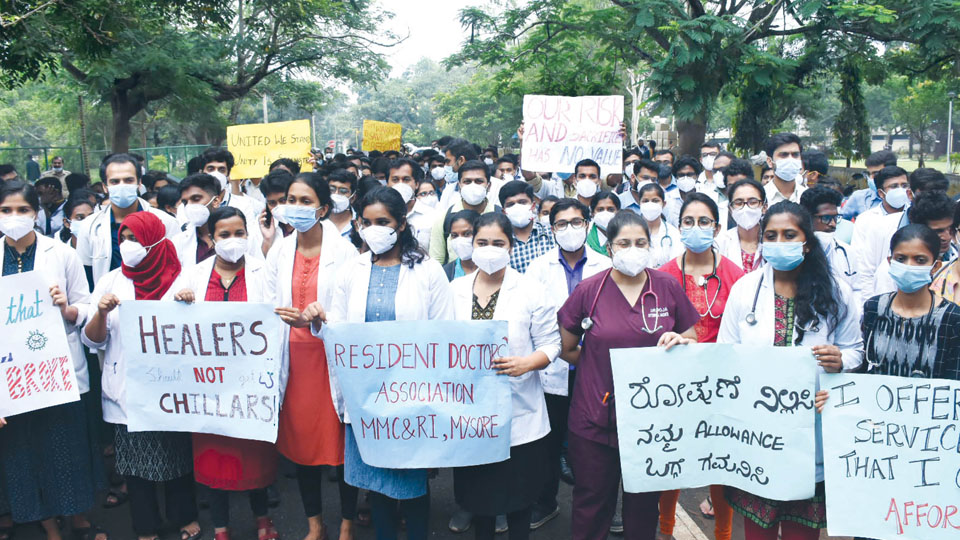 Mysore/Mysuru: A demonstration in front of the Deputy Commissioner’s Office here this morning marked the second day of the indefinite stir launched by Resident Doctors of MMC&RI.

The Resident Doctors, under the banner of Resident Doctors Association, had launched an indefinite stir at K.R. Hospital premises yesterday, alleging that they were not paid their salaries and incentives in full, despite putting in long hours of service amid the risks of  COVID pandemic.

The Resident Doctors marched in a procession from K.R. Hospital to the DC Office, where they submitted a memorandum containing their charter of demands.

Their demands included payment of COVID allowance, non-recovery from them of the  allowance already paid, payment of pending stipend due till date for PGs and Interns in full, payment of due salaries to Senior Residents for two months and payment of Rs. 5,000 stipend that are due for the month of July for second year PGs, among others.

Association President Dr. Vijay Kumar and others took part in the demonstration.