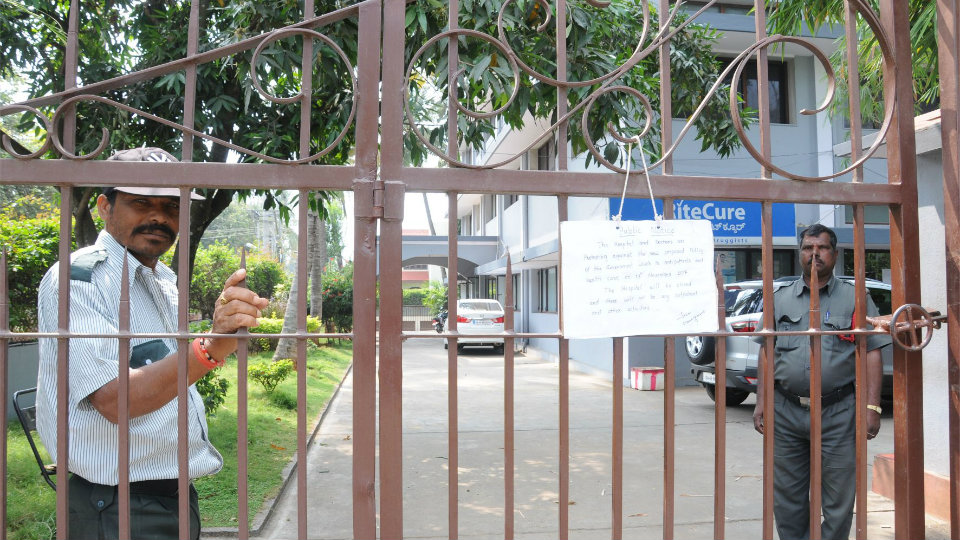 Mysuru: Even as the adamant attitude of both the State Government and private doctors continued on the fourth day today with regard to the controversial Karnataka Private Medical Establishments (Amendment) Bill, 2017, locked gates and notices welcomed the patients in all the private hospitals, nursing homes, clinics and diagnostic centres here in city.

Meanwhile, even as the Indian Dental Association (IDA) extended its support to the striking doctors, nearly 200 of them belonging to IMA, Mysore Branch and MAHAN staged a dharna in J.K. Grounds shouting slogans against the Health Minister K.R. Ramesh Kumar and the State Government against the draconian KPME (Amendment) Bill.

The outpatient departments, new admissions, emergency and casualty were all closed in all the hospitals including major ones like Apollo, Columbia Asia, Gopal Gowda and JSS Hospitals. In these hospitals, the treatment continued only for in-patients. 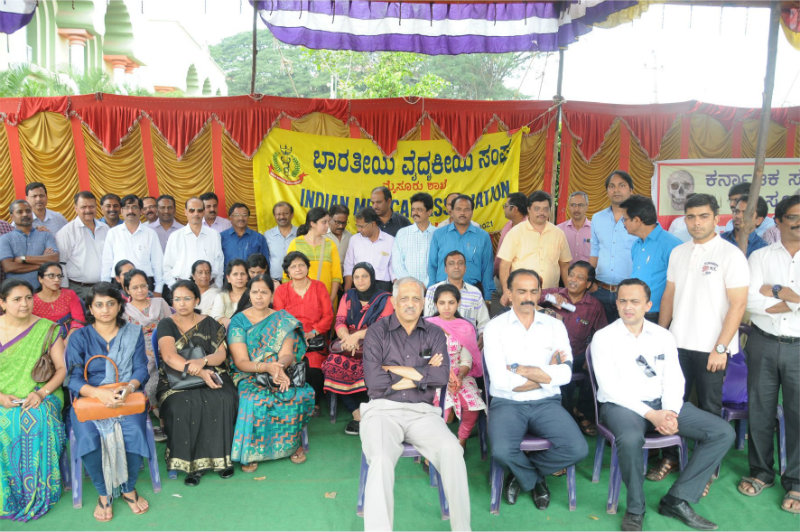 Doctors sitting in dharna at the J.K. Grounds in Mysuru today. Picture right shows a locked gate with public notice greeting people at a private hospital in city.

The influx of patients to Government Hospitals increased today and K.R. Hospital, the biggest Government Hospital in city, is bearing the brunt. The supply of floor beds to Cheluvamba Hospital increased with 200 of them already supplied to cater to pregnant women’s hospitalisation. “We have ordered for 500 floor beds out of which 200 beds have already been supplied,” said in-Charge Dean and Director Dr. Radhamani, speaking to Star of Mysore.

The outpatient department, Medicine, ENT, Skin and a few other departments saw patients in long queues waiting for treatment. K.R. Hospital, completely geared up to handle this situation, has deployed more number of junior doctors, postgraduate doctors, nurses and paramedics.

Leaves have been cancelled to all government doctors till the situation returns to normal, said Dr. Radhamani.

The 108 ambulances and private ambulances were seen disgorging the patients at the Government Hospitals as the private hospitals refused treatment.

Some of the private hospitals like Chandrakala, BM, Sigma, Kamakshi, had locked the gates and the Public Notice board in one of the hospitals pasted on the gate read, “The Hospital and Doctors are protesting against the new proposed policy of the Government which is anti-patients and health care on 13th November, 2017. The Hospital will be closed and there will not be any outpatient and other activities.”

The problems for thousands of patients is likely to intensify from tomorrow if both the State Government and striking private doctors continue to be adamant.

At an interaction programme organised by the Mysore District Journalists Association (MDJA) at its premises here today, Dr. S.P. Yoganna said that it would be a death knell for the private doctors if the KPME (Amendment) Bill is introduced in the Assembly and passed. “We strongly oppose the adamant and anti-doctors attitude of the Government and unless the Bill is withdrawn in its present form, we will continue our indefinite strike,” he said.

However, Advocate Venugopal who participated in the interaction pointed out that when he posed 67 questions to the private doctors on the proposed Bill, most of them did not know what it was all about.

Dr. Yoganna said that it is only because of the services provided by private doctors that the health of the people are being protected. “The Government should understand that 80 per cent of the doctors are in private establishments. The Government with just 6,000 doctors cannot cater to the huge population. It is only the private doctors with a strength of 40,000, which can deliver service to both the rich and the poor,” he said.

Call these numbers for Emergency Services in Mysuru District

In the wake of closure of private medical establishments including hospitals, clinics and diagnostic centres indefinitely, the Mysuru District Health Officer (DHO) Dr. B. Basavaraju has informed that one can contact the following Taluk Medical Officers in the respective areas of the District: