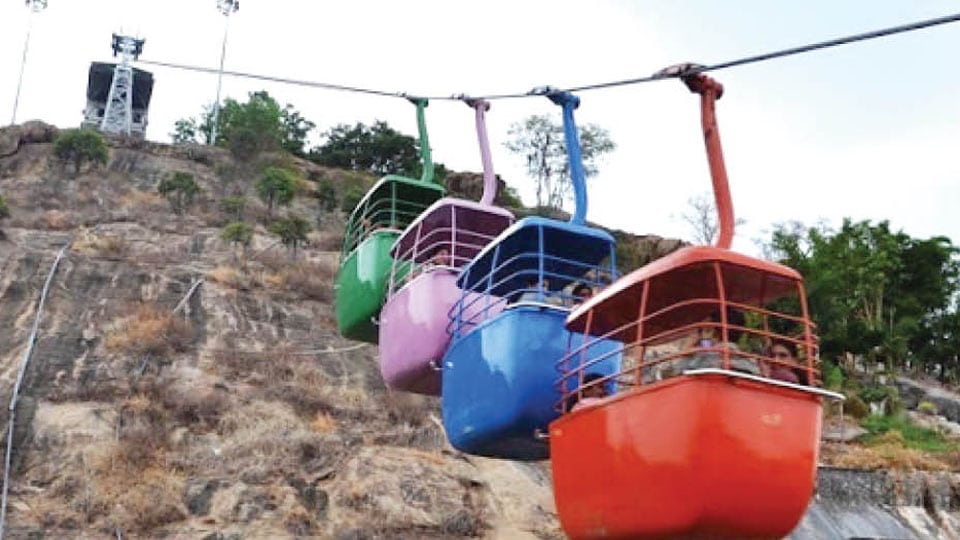 Destruction of Chamundi Hill Heritage: Hanging Environment and Heritage with a Rope(way)

Mysuru District in-Charge Minister V. Somanna has proposed construction of a Ropeway at Chamundi Hill. This proposal has already been made three times (2005, 2012, 2015) and dropped because of reasoned objections of the people of Mysuru, with public demonstrations, signature campaigns and letters to Chief Minister (CM) and other Ministers.

Chamundi Betta is not the only issue, however. The proposal for a City Bus Stand in JK Grounds on the “model” of Majestic Bus Terminus in Bengaluru has been proposed and dropped twice because of citizens’ well-reasoned objections. The question is about the process of planning that repeatedly brings up wish-list projects without consideration of economic viability, environmental degradation, heritage conservation or public opinion. So it is necessary to reiterate arguments against the proposed Ropeway.

The Ropeway for Chamundi Hill was opposed by Association of Concerned and Informed Citizens (ACICM) in a letter of 7.8.2005 to the then CM N. Dharam Singh, Tourism Minister D.T. Jayakumar and Deputy Commissioner, Mysuru. On 6.6.2012, Mysore Grahakara Parishat (MGP) wrote to the media with detailed objections to the Ropeway proposal. On 7.7.2015, MGP and Society for Empowerment of Voluntary Association (SEVA) launched a signature campaign opposing the Ropeway. Then on 4.8.2015, MGP wrote to the then CM Siddharamaiah that a signature campaign was conducted on 7.7.2015 at the foot steps of Chamundi Betta, that within less than two hours nearly 1,000 people signed opposing the Ropeway, and that many more signatures could be obtained by going into the city.

Construction and operation of the Ropeway will adversely affect the environment and heritage ambience. Clearance of a 2-km-long 10-metre wide strip of forest land will fragment the natural habitat of many species of animals inhabiting Chamundi Hill forest.

Civic authorities are unable to handle garbage left by tourists and devotees at the top and on the way up to Chamundi Hill. The Ropeway will add garbage on the hillside by passengers throwing plastic wrappers from cabins, besides garbage at the upper and lower stations.

Chamundi Hill is a heritage precinct and clearance from the Heritage Committee for the Ropeway is necessary. Apart from violating forest conservation laws, the Ropeway involves illegal conversion of forest land for commercial purposes. Thus the Ropeway adversely affects the environment and is undesirable.

Sound administrative practices dictate the first step in planning a project as calculating the Internal Rate of Return (IRR) to assess profitability of the potential investment and establish its economic feasibility. This study for the Ropeway project should include capital cost and its amortization, charge per person-trip including insurance, total passengers forecast per year, expected revenue and costs of operation and maintenance, grid and standby generation electric power, insurance, periodic safety certification, etc. This is part of accepted planning norms, but has not been done.

Chamundi Hill has two roads to its top and devotee-tourists use bus, taxi or car to drive to the top in about 15-minutes, while others climb the 1,000-plus heritage steps.

A Ropeway may be required for inaccessible areas where road construction is undesirable, not feasible or too expensive. For example, at Palani (Tamil Nadu) there is no motorable road to the shrine at the top and devotees who cannot climb the 700-steps use a Ropeway which has four 4-person cabins each way, with ticketing at Rs.50 per person-trip. The 320-metres trip takes about 5-minutes, excluding waiting time at the station.

Travel time on the 2-km-long proposed Chamundi Hill Ropeway may be 30-minutes, with ticketing estimated at Rs.90 per person-trip, with additional time and cost of transportation to and from the lower starting station.

The Wadiyars laid 1,000-plus steps to reach their Family Deity Chamundeshwari on foot with humility and piety. Today, especially on Tuesdays and Fridays, thousands of devotees climb these steps, symbolising this heritage. Whom will the Ropeway serve? Tourists? But tourists come either by bus or in taxi/car and few will spend time and money on the expensive Ropeway. Thus, the need for a Ropeway cannot be established.

In any case, planning authorities [MCC or MUDA] need to prepare a Feasibility Report for the proposed Ropeway and make it available for public scrutiny. Also, Environment Impact Assessment (EIA) including impact on wildlife has not been done for Chamundi Hill which is a sensitive ecological area, home to several species of flora and fauna. The permission of Forest Department has not been obtained.

The capital cost of the Ropeway may be borne by a private investor, who may abandon the Ropeway when profitability falls due to economic miscalculation or market forces. But the land used can never be restored to its original condition as a forest. This intangible but very heavy environmental and economic loss will be borne in perpetuity by the residents of Mysuru.

However, if Government intends to make the investment, it will be ill-advised because it would be better to spend time, effort and public money in providing basic governance and infrastructure, than in ventures that it is ill-equipped to operate efficiently or economically.

For the foregoing reasons, a Ropeway on Chamundi Betta would do great damage to the serenity of its holy ambience, its ecology and heritage environment. It serves no useful public purpose, but will permanently disfigure Chamundi Hill by irreversible damage to its already threatened sensitive ecology. The authorities have repeatedly ignored well-argued objections to the ill-advised Ropeway proposal, showing scant respect for public opinion, besides non-adherence to best-practice planning norms, environmental-heritage laws and rules. Government of Karnataka, therefore, needs to permanently drop this Ropeway proposal in the larger interest of the heritage and environment of Mysuru and its people.

Sudhir Vombatkere is a soldier, cross-discipline thinker, writer, fitness enthusiast, optimist and firm believer in the Constitution of India. After retirement in the rank of Major General, he has been engaged in voluntary social work and is also a Member of Government of Karnataka Heritage Expert Committee for Mysuru. He has over 678 published articles and papers on strategic and development issues. He can be contacted at: <[email protected]>.