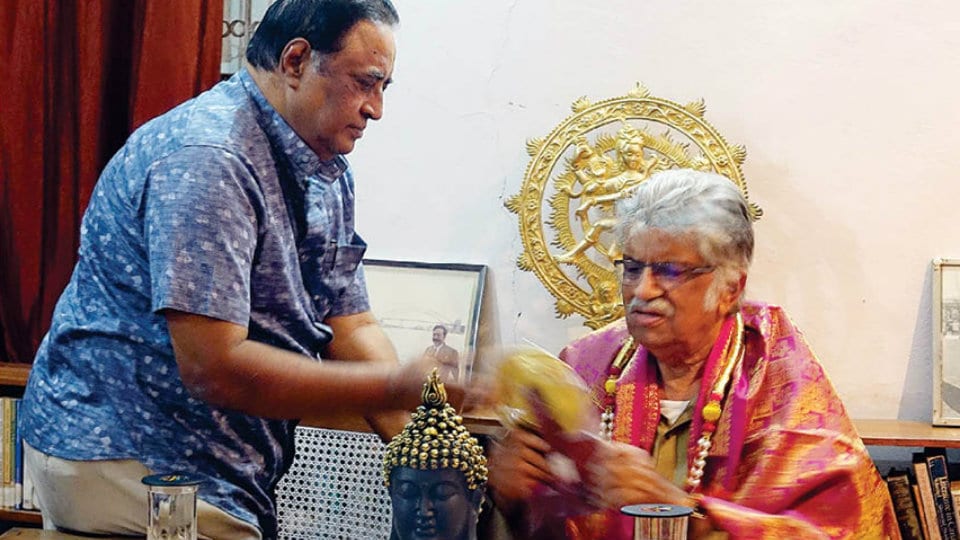 Mysuru: “One should know sorrow, one should know loneliness and then something happens and that is how great music comes out,” said Sarod Maestro Padma Shri Pandit Rajeev Taranath.

He was replying to a question about how one can produce great music, at a felicitation function organised by Dhvanyaloka’s Literary Criterion, Centre for English Studies and Indigenous Arts, for the Padma Shri award conferred on him, at Dhvanyaloka premises on Bogadi Road recently. He said that when a music connoisseur compared him to his Guru Ustad Ali Akbar Khan in Kolkata where he was performing, he (Taranath) said it was a great honour for him as that is the highest reward a Shishya can ever aspire for.

“People often ask me how you can practice a raga for months, do you not get bored or is it not just repetition for which my answer in simple terms has always been, how is it that one eats rice, rasam or sambar every day and do not get bored of it? The reason is because every day though it is the same sambar or rasam it tastes differently. Hence, when I play a particular raga and listen to it, it sounds differently to me every time,” said Pandit Taranath.

Former Madras Institute of Development Studies Director Prof. V.K. Natraj, speaking about his close association with the Sarod maestro, recalled that  when he was a student of St. Joseph’s College in Bangalore, how Panditji had influenced him over his mastery of the English language, where there was a ‘certain relish for English’ rarely seen now-a-days.

He also pointed out how the Anglophiles had contempt for those who did not study literature, mockingly saying that they lacked literary sensibilities. But all the same he (Natraj) who was not a literature person had the ability to differentiate between good music and great music which Pandit Rajeev Taranath always produced.