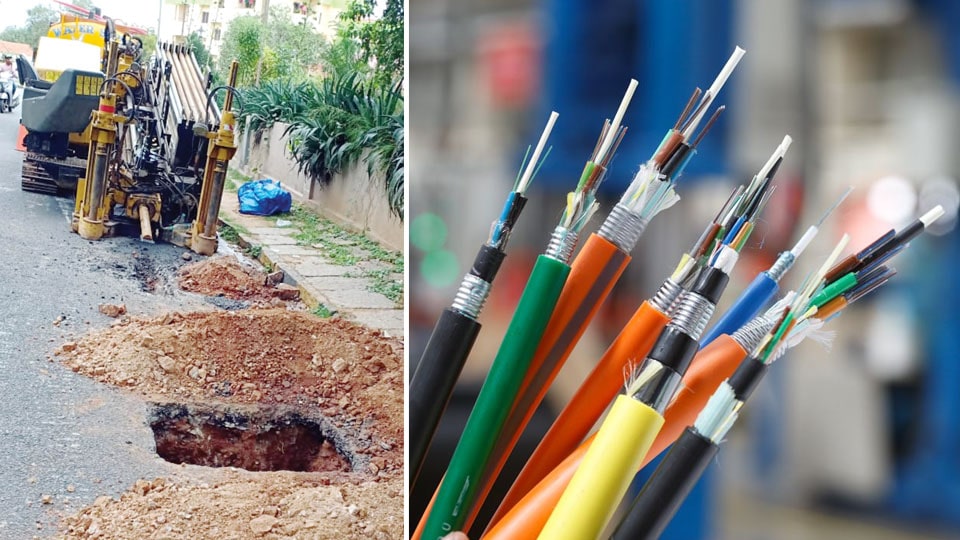 Digging by OFC firms leaves city roads in a mess

Mysuru: Incessant digging of roads across the city to lay Optical Fibre Cables (OFCs) has caused major inconvenience to city residents and commuters on busy roads especially during peak hours.

They are facing a lot of problems due to the continuous damage being caused to the roads. The roads are being dug to lay OFCs by Reliance Jio Infocomm Ltd (RJIL) and the company has paid over Rs.17 crore to the Mysuru City Corporation (MCC) as digging fees.

Agencies attached to the private telecom company are using Horizontal Directional Drilling Method to lay cables where one to two foot square pits are dug. In all, 174.63 kilometres will be dug within the city limits to lay the cables. The MCC approved the project in its Council meeting on 27.08.2019. After the pit is dug, drilling machines are used to drill holes and lay the cables.

As per the conditions imposed by the MCC, the pits must be dug closed fully to retain the original shape of the road by using jelly stones and asphalt. But this important condition is being violated with roads left with gaping holes and uneven surfaces.

Digging work has begun all over the city 24×7 and in the first phase, work is going on in Vijayanagar, Hebbal, JLB Road, Gokulam, Yadavagiri and other nearby areas. Other parts of the city will be covered in the second and third phases. Sadly, many newly-laid roads are being dug up, making a mess of it.

While laying cables, other cables of Chamundeshwari Electricity Supply Company (CESC), Cauvery pipes laud by Vani Vilas Water Works (VVWW) and UGD lines laid by the MCC are being damaged and VVWW engineers have admitted the same to

When asked about the problem, MCC senior officials, who wished to be anonymous, said that they will direct the zone and ward engineers to ensure that the roads are retained in their original condition.

“The MCC must coordinate with various telecoms to build a shared duct through which they can lay their cables. This can be done one-time and no digging will be required time and again. Digging per se costs lot of money for the service providers as well. The cost of laying the permanent duct, if shared among the providers, will be less than what they pay for the digging permission,” say residents.

“MCC prefers to grant multiple digging permission since it generates more revenue and cause huge inconvenience to the public in turn. This will also cost a lot to the exchequer as the roads have to be laid frequently because of constant digging,” they added.

Suresh Nayak, a regular commuter on Yadavagiri Road to reach his office in Bannimantap, says: “This is maddening. Every six months they come and dig up the roads. Sometimes even the Cauvery water pipes get damaged, other wires gets cut. This kind of rampant digging for laying OFC cables needs to be curbed.”

“After the work, they are supposed to repair the road and leave. Some do not even do that. The ward engineer is supposed to monitor that they finish the work and then repair the road. But, there is an understanding between the Corporators and they do not do it,” he alleged.

Residents say that the issue is that the MCC does not maintain a map of the underground assets and there are too many cables buried inside.

“Each provider should be asked to provide the map of the underlying asset and the MCC needs to maintain it. I believe there is software available for creating such maps and helping to visualise what lies underneath and at what depth and routing. The MCC and the road digging agencies must follow this technology,” says Shruthi Krishna who works at an office on JLB Road.