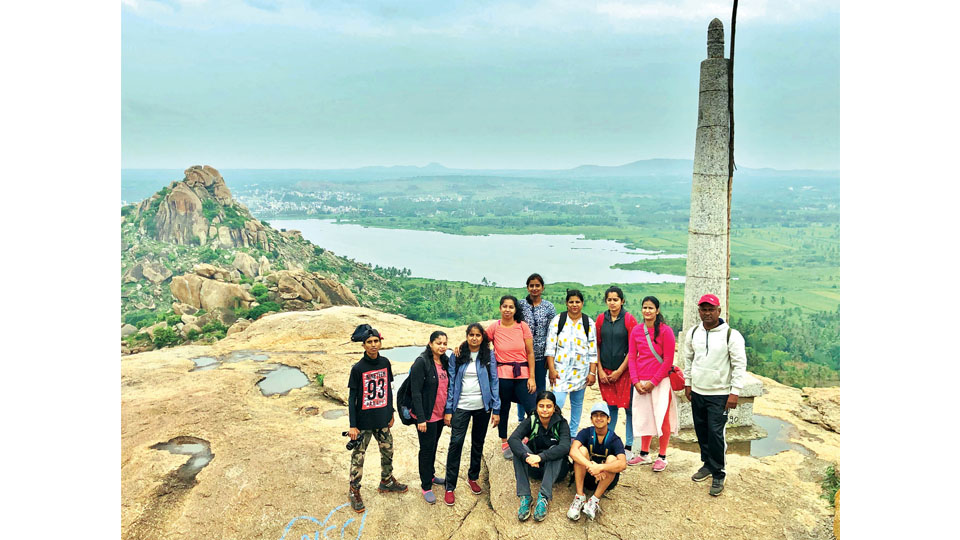 About seven nurses from the District Hospital participated in a day trek to Kunti Betta organised by the Tiger Adventure Foundation (TAF) on the occasion of the International Nurses Day on May 12 — it was this day Florence Nightingale was born and she nursed the wounds of the soldiers in the war-torn area in Crimean War.

Speaking on the occasion, DSD Solanki, an ardent adventure enthusiast, said “Though I have trekked with so many people from the cross section of society, this was the first time where the nursing community was being exposed to such adventure programmes.”

The nurses were given an orientation on the dos and don’ts about the trek, a brief history about the Kunti Betta or French Rocks and the mythological story behind this place.

The programme was coordinated by Dr. Nayaz Pasha, RMO, District Hospital, Mysuru and DSD Solanki, the Chairman of TAF.

“Heavy downpour in the night didn’t kill the enthusiasm of the trekking. I was anxious to trek and imagined myself of wearing a rucksack. But when I went through it, I realised how much planning and effort it takes to trek in the wilderness,” says Jalakshi, a Nurse.

“It was 5.30 am and the bus arrives at the District Hospital, Metagalli, Mysuru. Though we were nine of us for the trek to Kunti Betta in Pandavapura, two of them had to be dropped due to time constraint as they did not turn up for the event in time. Nevertheless, the man at the helm of the affairs never considered anybody important who doesn’t respect time,” says Bhavani, a Senior Nurse.

“Though our duties are monotonous and specially during the COVID-19, people have come forward with various gestures, but a programme like this is a special occasion to cherish as none of us ever thought in the wildest dream that one day we will be trekking in wilderness, that too on International Nurses Day,” says Sharmila, a Staff Nurse at the Hospital.

Sharing his experience, A. Anil Kumar, former Chairman of TAF, who was leading this trek, said, “Though I have seen the devotion of nurses serving the mankind in hospitals and at Nursing Homes, never thought that one day they will be trekking with me. It was a great honour for me to lead them to the Kunti Betta.”