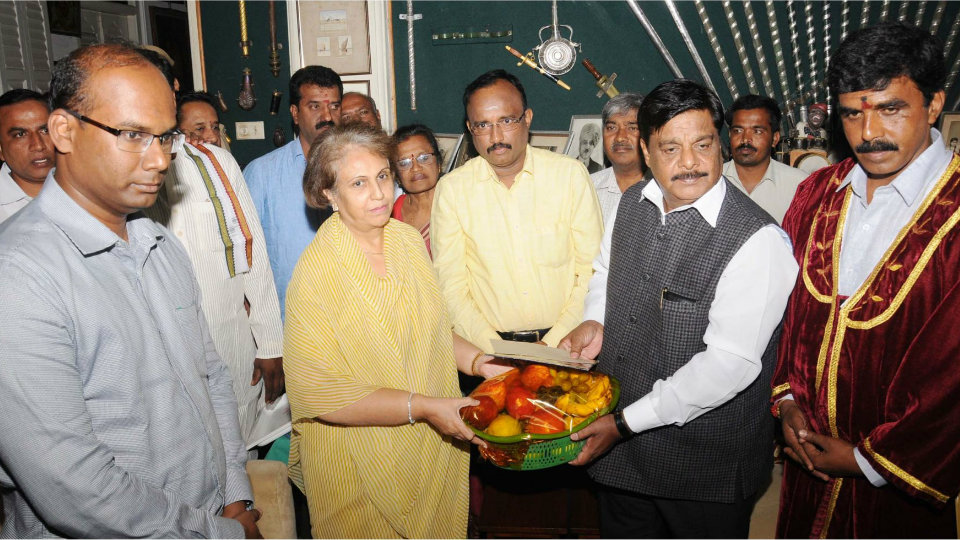 Mysuru: The District Administration has extended a formal invite to members of Royal family to participate in this year’s Dasara celebrations. The invitation was extended to Pramoda Devi Wadiyar by a team led by District in-Charge Minister Dr. H.C. Mahadevappa, Mayor M.J. Ravikumar and a host of officials including Deputy Commissioner D. Randeep and Palace Board Deputy Director T.S. Subramanya.

Along with the invitation, the customary royalty payment of Rs. 36 lakh from the State Government was paid to Pramoda Devi Wadiyar and the cheque was handed over by Dr. Mahadevappa. The Minister spoke to Pramoda Devi for over an hour and discussed about the royal assets to be used during the celebrations including the Golden Howdah, Golden Throne and other paraphernalia.

Accepting the invite, Pramoda Devi assured the Minister and the District Administration of full cooperation for the Dasara celebrations. Yaduveer Krishnadatta Chamaraja Wadiyar and his wife Trishikha Kumari Wadiyar will participate in the Paada Puja, and all the other key rituals, she told the Minister.

Khas Durbar, where Yaduveer will don the role of a king and address his “courtiers” after elaborate traditional ceremonies, will be held from Sept. 21 to 29 where both of them will be present, she said.

Yaduveer will participate at the Dasara procession inauguration programme in the Mysore Palace campus where Chief Minister Siddharamaiah will shower flower petals on the idol of Goddess Chamundeshwari inside the Golden Howdah carried by elephant Arjuna, she added.

When reporters asked her about the raging controversy of the setting up of the statue of Sri Shivarathri Rajendra Swamiji near Gun House Circle while a group of people demanding the installation of Srikantadatta Narasimharaja Wadiyar’s statue due to the place’s close proximity to Mysore Palace, she chose to steer clear from the issue.

“There were no differences with the State Government on the issue. I have not written to the Government on the matter and will not comment on the subject at this juncture,” she said. Minister Mahadevappa too told reporters that apart from Dasara, they did not discuss any other issues.

Expressing happiness over the cooperation extended to Dasara by the Royal family members, Mahadevappa said that the celebrations will be grand this time and it would be a spectacle to watch, eat and  merrymaking.

Regarding pending development works for Dasara, the Minister said that works were already on and would continue even after the celebrations. “Incessant rainfall has hampered asphalting work. If the roads are asphalted when there is rain, work will go waste since the quality of the work will leave a lot to be desired. Road work planned ahead of Dasara will now be taken up next month once the rainfall recedes,” he said.

The Minister added that the Dasara will be inaugurated on Sept. 21 at 8.45 am atop Chamundi Hill by poet Nissar Ahmed, who will arrive in Mysuru on Sept. 20.

CM Siddharamaiah will be present during the inauguration and on the same day, a host of programmes including Aahara Mela, Dasara Film Festival, Police Helpline will be inaugurated.

The same evening, Dasara cultural programmes will be inaugurated by the Chief Minister from the Mysore Palace premises against an illuminated backdrop of Palace, he added.